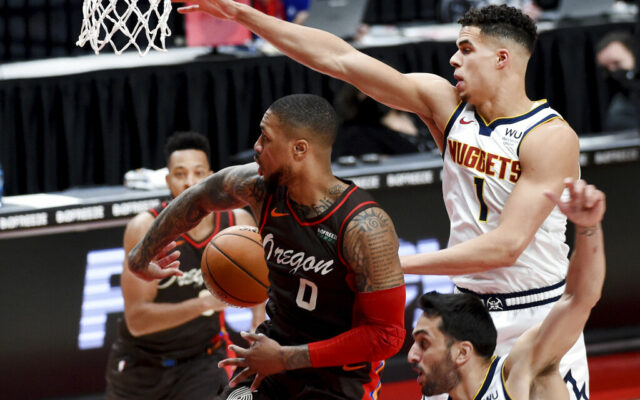 The day in the NBA started uncertain, but after the first quarter in the night games the West seemed pretty much locked up.

Portland took it to Denver, 43-22, in the opening frame. Dallas seemed uninterested in Minnesota, trailing 38-22 after one. Meanwhile, the Lakers held an eight-point lead against New Orleans, but it didn’t matter.

All three leads would hold, which meant Dallas got the No. 5 seed, Portland the No. 6, while the Lakers get the Play-In Tournament and the No. 7 seed. The Lakers will face Golden State on Wednesday.

For more on the play-in, we’ve got the East and West Schedule at the bottom of this post.

Back to the Blazers, Jusuf Nurkić had a double-double (18 points and 10 rebounds) at halftime. The Bosnian Beast finished with 20 and 13.

Damian Lillard only had seven points at the break, but he scored 15 in the third quarter and finished with a double-double (22 points, 10 assists).

Meanwhile, off the Portland bench, Enes Kanter (14 points, 15 boards), Carmelo Anthony (10 points) and Anfernee Simons (10 points) all made a positive impact as well.

Denver (47-25) didn’t seem all that interested in the first half, and four of the five starters didn’t come back after halftime. Markus Howard led the Nuggets with 23 points.

The Blazers and Denver will now face one another in the first round of the NBA Playoffs — which won’t start until May 22 or 23. The Play-In Tournament runs from May 18-21.

What We Know: Playoff Seeds & Matchups

Combining the rest of the results from the West, here’s the seeding ahead of the NBA Play-In Tournament.

(1) Philadelphia and (2) Brooklyn also wait to see who they will face.