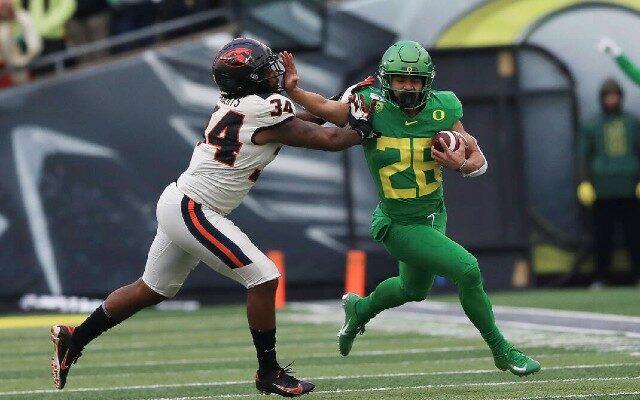 The Oregon Ducks and Oregon State Beavers will kickoff the annual rivalry game Sat. Nov. 27th at 12:30pm from Autzen Stadium, televised on ESPN, it was announced Saturday night.

The winner of the contest could represent the North Division in the Pac-12 Championship Game on Friday, Dec. 3rd in Las Vegas.  Washington State (5-3 Pac-12) can complicate matters if they defeat Washington in the Apple Cup on Friday in Seattle (4:30pm on 750 The Game).

The Beavers need the Huskies to defeat the Cougars in order to have a shot at the North division crown.  The Ducks, meanwhile, control their destiny: a win over OSU puts them in the Pac-12 Championship game and earns a rematch with Utah.

Oregon (9-2, 6-2 Pac-12) limps into the rivalry game with the Beavs after getting blown out by No. 23 Utah, 38-7.  Ranked No. 3 in the CFP at the time, the loss eliminates the Ducks from national championship discussion.

Oregon State (7-4, 5-3 Pac-12) beat Arizona State 24-10 to secure a perfect home record this season (6-0).  The Beavs became bowl eligible the week prior with a win over Stanford, ensuring a postseason trip for the first time since 2013.

Last season, the two rivals met in the fourth game of the year due to the COVID-impacted schedule.  Oregon State pulled a sizeable upset in Corvallis, winning 41-38.  Oregon still leads the all-time series in the rivalry previously known as ‘The Civil War’, 66-48-10.