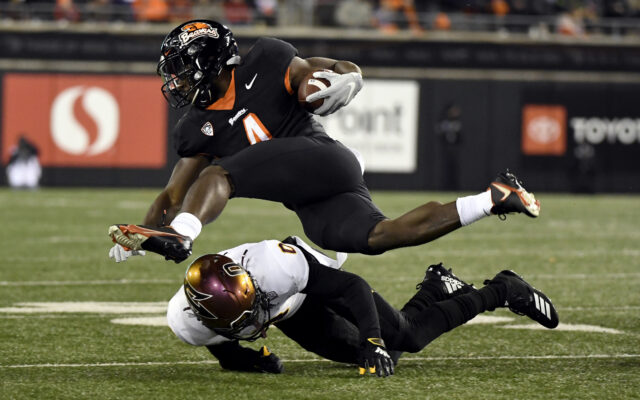 The Oregon State Beavers took down Arizona State 24-10 at Reser Stadium Saturday night to finish the campaign undefeated at home. The victory marks their first 6-0 home record since 2000, a season in which current Head Coach Jonathan Smith was pulling the strings from quarterback.

Oregon State became bowl-eligible for the first time since 2013 last week with a lopsided victory over Stanford, many believed last week’s achievement would cloud over the ASU matchup; it most certainly did not. OSU entered as a slight underdog but proceeded to control the affair from the offset.

The first Sun Devil drive of the night resulted in a Jayden Daniels pick. It set the tempo for an Oregon State defense that has been humming under interim Defensive Coordinator Trent Bray. Oregon State’s defense in the first half, for the second straight week, gave up zero points. Alternatively, the offense wasn’t half bad either to start. Kicker Everett Hayes got the party started in Corvallis hitting an impressive 52-yarder and on the following two OSU drives Chance Nolan scored a touchdown: a pass to Tre-Shaun Harrison and a one-yard keeper run.

The third quarter was relatively quiet but with seconds left in the half, the Beavers suffered a special team’s disaster fumbling the ball on a punt which lead to ASU getting the ball on the Oregon State four-yard line. DeaMonte Trayanum capitalized on the opportunity making it 17-10 and momentum going the ASU way.

Jonathan Smith didn’t let the massive mistake cost his side and came out in the fourth quarter aggressive, going for it on fourth down and two. Jack Colletto, known as the Hammer, burst his way for the fourth down conversation and much more:

While the game had moments of brilliance and excitement, perhaps the most impressive part of Oregon State’s night was the will to stick to their ground-and-pound identity; OSU outrushed a good ASU ground attack 235-100 and lead back B.J Baylor finished with 150 yards on 20 carries. OSU was able to rest on their ground game and impressive defense for the big-time win.

In 2018, Jonathan Smith’s only home win was against Southern Utah. After the victory tonight, he just secured @BeaverFootball their first undefeated home season in 21 years. #GoBeavs

Next for Oregon State is the game formally known as the Civil War. Oregon State took down Oregon in Corvallis last year in a foggy affair and the Ducks, coming off a blowout loss to Utah, will be looking for revenge in Eugene next Saturday.