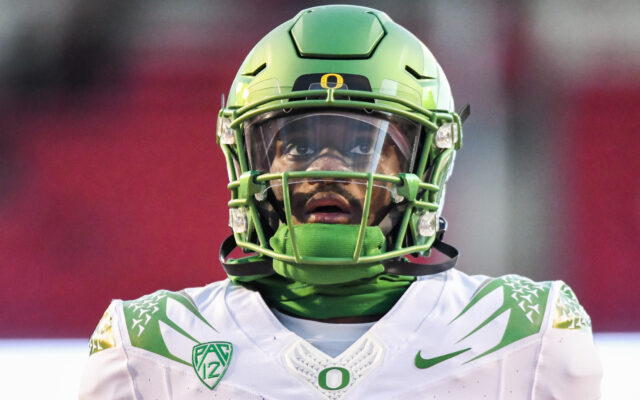 Both teams traded punts on their opening drives of the game, but Utah found their rhythm early on their second possession, marching 63 yards on 13 plays to punch in the first score of the game. Tavion Thomas scored on a 10-yard touchdown run to give the Utes a 7-0 lead.

Oregon drove the ball just inside of the Utah red zone on their second possession, but were forced into a 4th down at the Utes 18 yard line. Camden Lewis’ field attempt was blocked by Cole Bishop, and the Ducks were held without any points.

Midway through the second quarter, Utah quarterback Cam Rising found some success through the air connecting with Brant Kuithe on back-to-back big plays to get the Utes down to the Oregon 27 yard line. Utah got down the 1 yard line before Cam Rising punched it in on the short run to extend Utah’s lead to 14-0.

The Ducks needed to respond quickly and on the ensuing possession, Anthony Brown Jr connected with the freshman Kris Hutson for a 50-yard completion. The completion got Oregon down to the Utah 25 yard line, with a good opportunity to cut the game to one possession.

Oregon got as close as the Utah 14 yard line before a holding penalty backed them up and ultimately forced them into a 4th down at the Utah 23 yard line. Camden Lewis’ second field goal attempt was wide right, and the Ducks squandered another scoring opportunity.

Cam Rising found his guy Brant Kuithe for a big game on their next possession, setting the Utes up with another scoring opportunity. The drive took just 6 plays for Utah to find the end zone again on a 4-yard touchdown run by Tavion Thomas.

Just went it seemed things could not be worse for Oregon, disaster struck on the final play of the half. Oregon punted the ball away to Utah’s Britain Covey who ran the punt back 78-yards for another Utes touchdown as the clock hit 0:00.

Oregon began the second half with the ball and finally put together a much needed scoring drive. The Ducks converted a 4th & 2 at the Utah 46 yard line, and one play later Anthony Brown Jr found Devon Williams for a 36-yard touchdown pass.

The offense did their job to set the tone at the start of the second half, but Oregon’s defense could not stop Utah on the Utes ensuing possession. The Utes marched down the field on 11 plays, capping off the drive with a 5-yard touchdown run by Tavion Thomas (his 3rd rushing touchdown of the game).

Oregon’s offense would turn the ball over on downs at the Utah 36 yard line on their next possession, handing the ball back to Utah as the third quarter came to an end.

Utah controlled the time of possession all night, and continued to run the ball successfully while bleeding a ton of clock on the second possession of the second half. The Utes burned half of the fourth quarter and put another three points on the board with a 26-yard field goal by Jadon Redding.

The Ducks had a chance to put up some late points, but missed on a couple shots at the end zone and turning the ball over on downs again. Utah would run out the rest of the clock to secure the huge upset victory, eliminating Oregon from the CFB Playoff race.