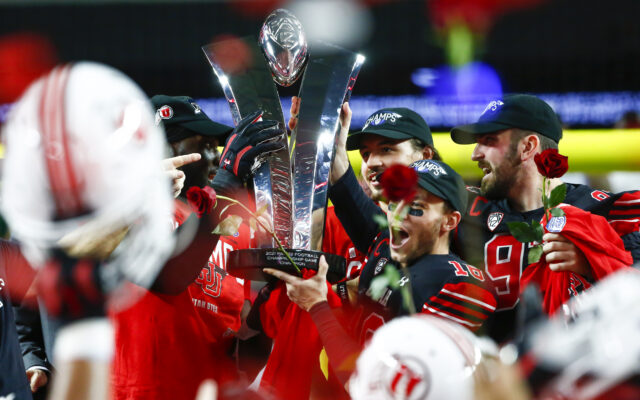 FILE - Utah players celebrate with the trophy after their victory over Oregon to win the Pac-12 Conference championship NCAA football game Friday, Dec. 3, 2021, in Las Vegas. The Pac-12 announced, Wednesday, May 18, 2022, it was scrapping its divisional format for the coming season Wednesday, May 18, 2022. (AP Photo/Chase Stevens, File)

The media has predicted Utah to repeat as Pac-12 football champions, with Oregon also picked to reach the conference championship game to face the Utes for a second year in a row.

The full press release from the Pac-12 Conference is below:

LOS ANGELES — UTAH has been chosen as the favorite to win the 2022 Pac–12 Conference Championship, presented by 76®, in a vote of 33 media members who cover the league. The defending Pac–12 champion Utes received 26 of the 33 first-place votes to earn the preseason nod.

This will be the first season that the Pac–12 Football Championship Game will be played between the two teams with the highest conference winning percentage.  This change came about following the NCAA Division I Council decision in May to deregulate the rule that had limited an individual conference’s autonomy to determine their football championship game participants.  It was based on a motion brought by the Pac–12 and unanimously supported by all FBS conferences

The media has correctly selected the Conference Champion in 32 of 61 previous preseason polls, including five times in the 11-year FCG era.

2022 Pac–12 Football Media Day will be held in Los Angeles on Friday, July 29.  For all materials needed during media day please go here.

The 2022 Pac–12 Football Championship Game, presented by 76, featuring the two teams with the highest conference winning percentage, will take place on Friday, Dec. 2 at Allegiant Stadium in Las Vegas, NV. The game will be telecast to a national audience on FOX.

The 2022 Pac–12 football season kicks off on Thursday, Sept. 1 with an in-state matchup between Northern Arizona and Arizona State at 7:00 p.m. PT on Pac–12 Network. The first Conference showdown features USC at Stanford on Saturday, Sept. 10 at 4:30 p.m. PT on ABC. Click here for the complete Pac–12 Football schedule.