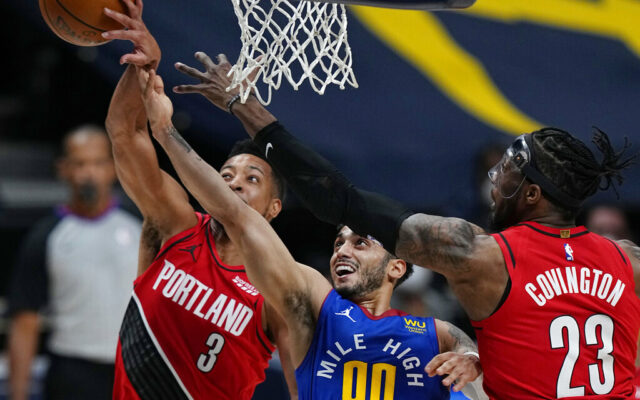 Damian Lillard had one of those “where were you” games again, and sadly the Portland Trail Blazers squandered it in double overtime. Denver now leads the series 3-2 after a 147-140 win.

Lillard needed an historic performance after Jusuf Nurkić fouled out, and honestly even before the big guy left.

The Letter O put up 55 points (a Blazers franchise playoff-record; also the seventh-best scoring output in NBA playoff history), and he made 12 three’s (an NBA playoff record).

Damian Lillard is the first player in NBA history with 50 Pts, 10 Ast and 10 3-pointers in a game, regular season or playoffs 👏 pic.twitter.com/Mfo7xVm3td

Considering how the game started maybe Portland was fortunate to even make it to overtime, let alone double overtime.

The Blazers started 0-for-8 and trailing 10-0. Portland didn’t hit their first three until nearly eight minutes had passed. Eventually they were down as many as 22 points.

Then, suddenly here they came. The Trail Blazers ripped off a 19-5 run including 12-straight to get within eight (59-51) after CJ McCollum hit a three with 2:50 to go in first half. They only trailed by three entering the break.

Nurkić fouled out with four minutes left in the fourth quarter. Nurk was getting hosed left and right on the whistles. He left the game with a double-double (13 points, 11 rebounds).

With the Bosnian Beast out of the game, Nikola Jokić looked like a different player. He didn’t score a lot of points, but without Nurkić hounding him Jokić could play the way he wanted to instead of being bodied constantly.

Robert Covington deserves praise. He was huge and had one of his most complete games as a Trail Blazer. He collected 19 points, 11 rebounds and two steals before fouling out in the second OT too. Unfortunately, he also had two blown dunks in extra time, but he helped Lillard the most after Nurkić.

Aside from RoCo and Nurk, no one else really helped Lillard. CJ McCollum and Carmelo Anthony had one of their worst games, which included untimely turnovers.

For McCollum, he finished with 18 points, seven assists and seven rebounds, but he only scored five points between the fourth quarter and the two overtimes. CJ also fouled out just before the game ended. He only had three turnovers but none was bigger than when he stepped out of bounds with 10.2 seconds left and Portland only down three.

As for Melo, he was part of a bench unit that combined to score 22 points. The one-time Nugget shot 3-for-11 (2-for-9 from three) with eight points, four rebounds and three assists. He also had four fouls and two turnovers.

Finally, Norman Powell followed up his 29 points in Game 4 with just 13 in Game 5. He missed all three of his three-point attempts.

The Blazers have their backs against the wall as the series shifts back to Portland. Game 6 is set for a 5 p.m. PT tip on TNT and NBC Sports NW.