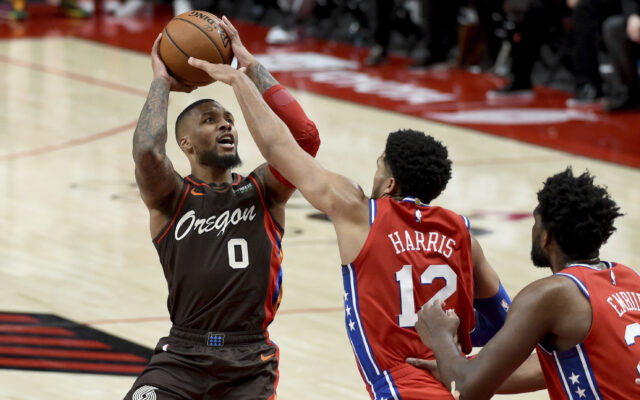 The Portland Trail Blazers haven’t won both games of a back-to-back all season. They have their fourth shot at it on Friday night.

In Portland’s back-to-back matchups, they’ve won the first game three times (including Thursday night against Philadelphia), but the other two times the Blazers then lost the second game.

The third back-to-back the Blazers had, they lost the first game, and then won the second game the next night.

So to recap, Portland is 3-3 in their back-to-backs so far this season. If they win on Friday night at home against Cleveland, it would be the first time the Blazers won both games of a back-to-back.

Portland was down several players with others playing through injuries.

The Blazers were without the obvious three, CJ McCollum, Jusuf Nurkić and Zach Collins. Then, rookie CJ Elleby was a late scratch due to illness, according to the team.

Also, Nassir Little was officially “available,” but he did not play.

Instead Portland relied on Damian Lillard, Carmelo Anthony and Gary Trent Jr. to carry the team’s scoring. Lillard (30), Anthony (24) and Trent (19) were the only Blazers to score more than 11 points.

Enes Kanter deserves a shoutout for not just his double-double (10 points and 14 rebounds), but he played well after getting bloodied up by teammate Robert Covington.

Enes Kanter leaves the game with a face laceration

He walked off to the locker room pic.twitter.com/XdxccdyPeB

Speaking of Covington, he and Derrick Jones Jr. continue to struggle scoring. The pair combined for 14 points.

Despite the offensive issues, Covington poked away the 76ers inbounds pass that helped Portland seal the victory.

Remainder of the Season’s First Half

Portland has 11 games remaining before the All-Star Break (March 5-10), including Friday night against Cleveland.

The Blazers have five more games on national TV.

Portland also has three more back-to-backs before the break, not including the Philly-Cleveland back-to-back from Thursday and Friday.