The Trail Blazers Will Leave Orlando Soon, but Questions Remain 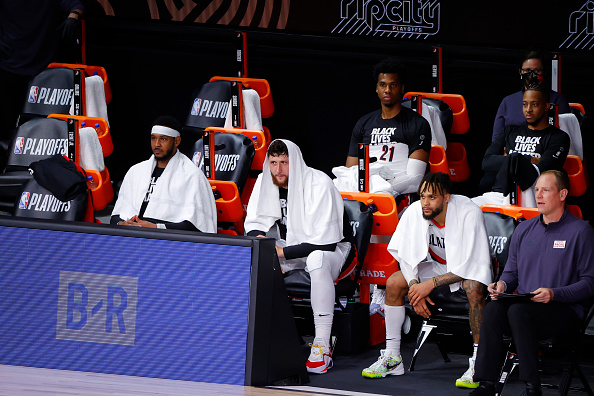 It’s fitting, in a season so wracked with injury, that the Trail Blazers will likely face elimination from the NBA Playoffs with Damian Lillard in street clothes and Portland fans wondering where the team goes from here.

It’s no cause for celebration, unless you were one of the many fans that feared the worst when a second MRI was scheduled to examine the extent of the damage. But in a season that seemed doomed from the start due to injury, it makes sense. First – from last season – Jusuf Nurkic needed to rehab his broken leg, then Zach Collins suffered a major shoulder injury, then Rodney Hood tore his Achilles.

It was impossible to get a read on this Blazers group. They looked dead in the water when the season paused due to the coronavirus. But then they rose from the ashes and played stellar basketball in Orlando, earning the 8th seed in the West, and a soon-to-be first round exit at the hands of the Los Angeles Lakers.

There are questions surrounding the team; Does Lillard need more help around him? Is Terry Stotts the man to fix Portland’s abysmal defense? Can Neil Olshey swing a major trade to upgrade the wings – knowing that he’s largely hamstrung from the salary cap?

I don’t know any of the answers, except to question number one – yes, Lillard needs more help. The man has played basketball at a level never seen before in Portland. Not by Clyde, not by Roy, not by Walton. Yet there just isn’t enough talent around him to get over the hump. This year was a sort of lost season due to the injury issues. What will next year bring? Aside from Lillard turning another year older?

Portland needs to get better, but they don’t really have a lot of options. They’re projected to again be over the cap next season, with issues at both ends. Lillard and CJ McCollum will make a combined $61 million next season between them, while Anderson Varejao and Andrew Nicholson – two players who literally never even suited up for the Trail Blazers – will make a combined $4.7 million. The team is both financially top heavy, and has dead cap space.

Hassan Whiteside will likely not be back, given that he still is a starting caliber center with Jusuf Nurkic in his way. Mario Hezonja and Rodney Hood both have player options that they’re all but certain to exercise. How can Olshey take this roster to the next step? I don’t know, but I’m glad I’m not the one responsible for figuring that out

The Trail Blazers gave us some great, entertaining basketball this month after largely being irrelevant for most of the season, often through no fault of their own. Injuries suck, but they’re part of the game. But the organization needs to have a plan for next season, because Blazer fans won’t be forgiving if everyone is healthy and they’re still stuck watching a below .500 team.