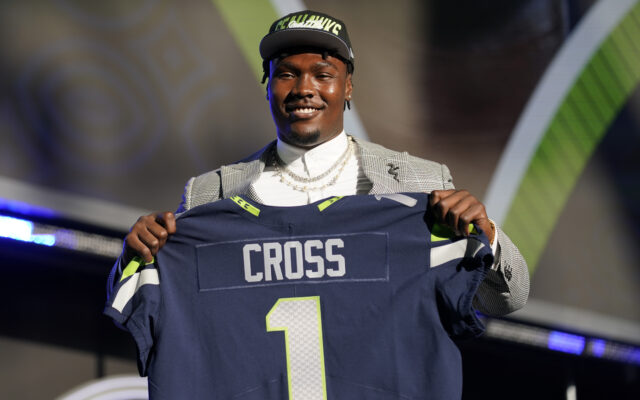 Mississippi State offensive lineman Charles Cross holds a jersey after being chosen by the Seattle Seahawks with the ninth pick of the NFL football draft Thursday, April 28, 2022, in Las Vegas. (AP Photo/John Locher )

The Seattle Seahawks acquired some help at offensive tackle with the ninth overall selection in the first round of the 2022 NFL Draft on Thursday.

Charles Cross, a 6’5”, 305-lb tackle from Mississippi State, is the newest Seahawk.

The Seahawks got themselves an elite pass protector!! Charles Cross has outstanding balance and strike power! pic.twitter.com/RHMa2Nu37S

a thread with some Charles Cross clips for Seahawks fans.

I’m a huge fan of his game and think he has all the makings to be a bonafide LT for years. https://t.co/OHwJv1XO3w

Cross was introduced in Seattle on Friday.

The Seahawks acquired the ninth overall pick as part of the return from the Denver Broncos in the Russell Wilson trade in March.

Seattle has an important second day of the draft on Friday, possessing second round picks at No. 40 overall, No. 41 overall, and a third-round selection at No. 72 overall.