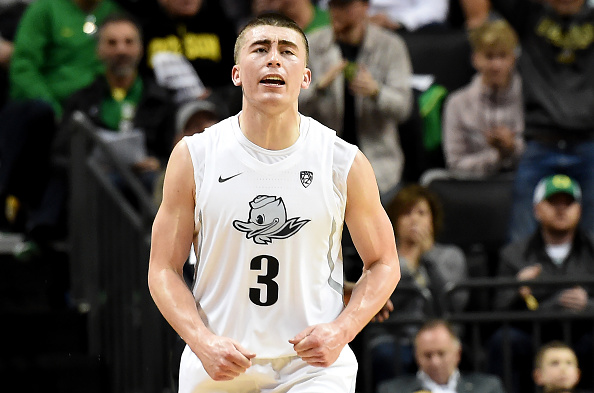 The senior guard from West Linn, Ore., was one of five finalists announced by the Atlanta Tipoff Club. Joining Pritchard among the finalists for the nation’s most outstanding men’s college basketball player are Udoka Azubuike of Kansas, Luka Garza of Iowa, Myles Powell of Seton Hall and Obi Toppin of Dayton.

He joined Gary Payton (Oregon State, 1989-90), Damon Stoudamire (Arizona, 1994-95) and Jason Terry (Arizona, 1998-99) as the only players in conference history to lead the league in both scoring and assists. The previous three players to do that were all consensus first team All-Americans and Payton and Terry were National Players of the Year.

Next week, Pritchard will find out if he is to become the first consensus first team all-American at Oregon since 1940. The four national programs that currently account for consensus status are the Sporting News, Associated Press, NABC and USBWA. Pritchard was a first team selection by the Sporting News last week. The A.P. teams are due out Friday, while the NABC and USBWA teams will be announced next week.

Pritchard was one of just four players nationally who is lead his conference in both scoring (20.5 points per game) and assists (5.6 per game).

In addition to being a Naismith Trophy finalists, Pritchard is also one of five finalists for the Bob Cousy Point Guard of the Year Award, one of 15 student-athletes on the Wooden Award National Ballot and one of 12 midseason finalists for the Oscar Robertson Trophy.

Pritchard has scored at least 20 points against 10 different Pac-12 opponents this season.

Oregon was ranked 14th in Tuesday’s final Associated Press poll of the season.