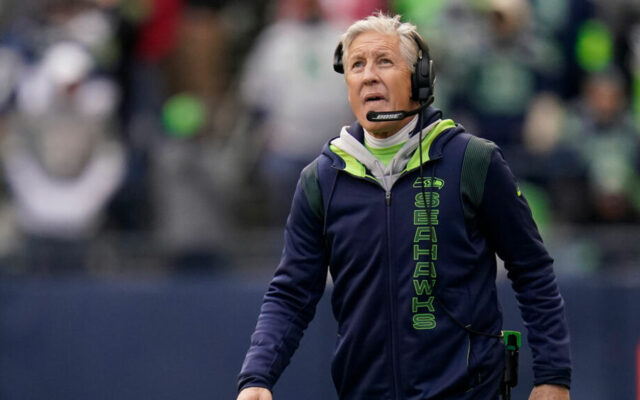 Although the franchise has not reciprocated this feeling through actions, it shouldn’t be a significant surprise that Carroll could be feeling pressure to achieve success with the Hawks quickly.

We may not find out what really went down behind the scenes with Russell Wilson and why Seattle opted to trade him away rather than parting with their head coach. Maybe Russ truly wanted out; perhaps the firing of Carroll wouldn’t have moved the needle for the quarterback looking for a new, fresh start.

We know that Carroll is still the head coach of a Seahawks team that looks much different from the past decade and isn’t necessarily sitting in a great spot to succeed. It has been rumored that Carroll’s job is at risk for quite some time now, but the front office has seemingly ignored the noise.

2022 should be the ultimate make-or-break year for him. In the past few years, he hasn’t won at a high level with a Pro Bowl-caliber QB. His defense, a staple of his great teams, has deteriorated in recent years. And now he has constructed a roster that is seemingly much worse than what we’ve seen from the Super Bowl teams that dominated the 2010s.

In January, Carroll was asked pretty bluntly if he had questions about whether he’d be with the team.

On top of that, he discussed his relationship with team president Jody Allen, who assumed the role after her brother Paul’s death in 2018.

“She’s very analytical, and she wants to make sure that we’re doing everything that we can possibly do to get everything right,” he said. “She’s a terrifically competitive person in that regard, and she doesn’t want any stone unturned. Exactly the way I look at it. I just feel so connected to that thought that that’s what we do, but to have your owner talk that same way, that’s a competitive perspective.”

From that, you wouldn’t assume this is a guy who is feeling the pressure. And maybe he isn’t, not internally, at least. After all, he is signed through the 2025 season after receiving a 5-year extension in 2020.

But if the last two years indicate where this franchise is heading, the Hawks should not be as warm and cuddly as they seem to be with their head coach and vice president. Yes, he also runs the roster and pretty much has a say on who gets signed. Carroll has Bill Belichick’s levels of control but has not had the success to back that up.

The Hawks are just a season removed from a first-place finish in the NFC West, but that feels like a decade ago. Since then, we have had an offseason that involved more drama than anyone in the state of Washington hoped for between the team and their star QB. That was followed by an abysmal 7-10 last-place finish and the subsequent trading of Wilson.

This most recent season should be looked at with the most scrutiny. Wilson was injured for a good chunk of it with a finger issue, and we were given a behind-the-curtain look at what this team is without Russ.

Let’s not forget, the Seahawks’ success is mainly tied to Wilson’s emergence. In the two years before Seattle drafted Wilson, Carroll was 7-9 both seasons. In 2012, they finally turned that corner. Since then, they had not finished under .500 in a season until last year, when he was sidelined most of the time or feuding with the coaching staff on the way the offense should run.

Maybe that is the biggest red flag amongst all of this. Wilson, a star QB who has won this franchise a Super Bowl and been to nine Pro Bowls, had to publicly fight with his head coach over how his side of the ball should be run. And if the evidence amounts to anything, it seems like Wilson lost that battle.

Let’s not forget about the defense, either. In 2019, they had the 7th worst unit in the league. In 2020, it was the 11th worst unit. And in 2021, it was the 5th worst. Carroll is a defensive-minded coach who has forgotten how to coach his defense.

Carroll didn’t win without Wilson last year, but now he has an entire season to prove that he can do it without him. If he fails, this should be the end of the line. At 70-years-old, far too many good coaches are waiting in the wings.

Look at the NFC West, the average age of the other coaches in that division is 40-years-old. The youth movement amongst coaches is genuine in the NFL, and when it comes to attracting players via free agency, you must be following that trend.

The odds are stacked against Carroll. If he surprises us all, have him back. But if the Hawks are fighting at the bottom of the division for a second-straight year, the writing should be on the wall.