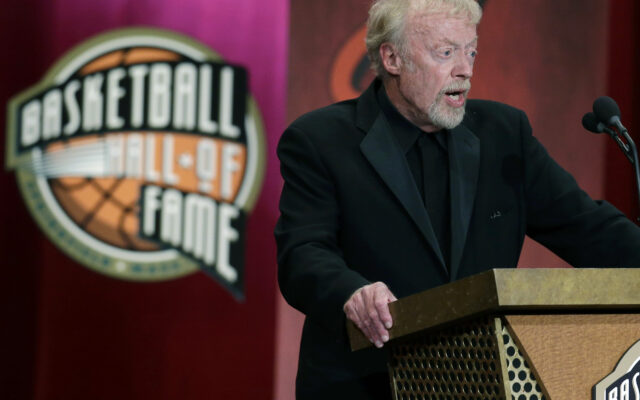 Inductee Phil Knight, co-founder of Nike, speaks during the enshrinement ceremony for the 2012 class of the Naismith Memorial Basketball Hall of Fame at Symphony Hall in Springfield, Mass. Friday, Sept. 7, 2012. (AP Photo/Elise Amendola)

If Nike founder and Oregon native Phil Knight purchases the Portland Trail Blazers, his already prodigious legacy in the Oregon sports scene will be completely secured.

However, if the purchase goes through, Knight’s legacy won’t be the only one being secured.

The legacy of Paul Allen and that of his family as the savior of Northwest sports franchises will also be set.

Earlier this week, Knight, as part of an ownership group that includes Los Angeles Dodgers minority owner Alan Smolinisky, made an offer north of 2 billion dollars to acquire the Trail Blazers. According to John Canzano, the potential ownership group also contains billionaire Kirk Brown, “who is said to covet a WNBA expansion team.”

The Blazers were valued at around three billion last year, so any purchase price would probably need to be closer to three billion than two, but the fact that Knight has entered the ring at all speaks volumes about his belief in the franchise long term. There were no indications of Knight having any interest when Paul Allen tried to attract buyers for the team in 2006. Sixteen years ago, Allen pulled the team off the market because of a shortage of significant buyers, as well as his desire to sell to a local buyer to ensure the team remained in and thrived in Portland, and the franchise has only increased in value since then. As a measuring stick, when the Seattle Supersonics were sold that same year, they went for $350 million.

Nearly two decades later, Knight is reportedly willing to throw around at least seven times that amount to land the Blazers and make sure they stay in Portland for decades to come. Why now, when Knight passed on the opportunity nearly 20 years ago?

Maybe the time is right.

Maybe Knight has nothing else left to prove in the Northwest sports market other than showing he can own a professional sports team.

Knight’s name comes up every time someone mentions a professional sports franchise either coming to or being purchased in Portland. But he’s never publicly shown any interest-until now.

The Blazers are at a curious spot in their history, and Knight may see this as the perfect time to ride in as the (ahem) Knight in shining armor to secure the franchise’s future. The Blazers have been an NBA odd duck for years and have been in a weird spot since Paul Allen’s death. Leaving actual on-court performance aside, they play in one of the smallest media markets in the NBA, with an arena that is now among the league’s oldest. If Portland were any other market, vultures would probably be circling to try and buy and relocate the franchise. However, the NBA has very little appetite to nuke the entire Northwest market after having moved the Sonics, and the league also does not want to see Portland-with its rabid fan support and an existing arena-get burned to move the team to a potential expansion market, such as Seattle or Las Vegas. That means that unless the NBA is willing to let many people get very angry with them, the only practical market for the Blazers is Portland.

That leaves the door open for a buyer like Knight, who is one of the few of Oregon’s mega-rich with the drive and capital to pull off such a purchase, to get the team. It also leaves the Allen Trust with a choice. Do they drive for the highest price tag possible and put the team in a position where it could be relocated, however unlikely that possibility may be, or do they take the chance to get a fair market deal that would secure the future of the trust? Such a deal would also secure the Blazers’ future in Portland, Paul Allen’s legacy, and allow Phil Knight to absolutely cement his legacy in the Northwest. Allen rode in on a white horse to purchase the Blazers in 1988 and then the Seattle Seahawks a decade later to ensure both stayed in his beloved Pacific Northwest, and now Knight could potentially pull off the same feat.

If the Blazers trust allows the Knight group to buy the Blazers, and they absolutely should, they would be honoring Paul Allen’s legacy. The team he loved so much will stay in the city he wanted them to play in. Maybe in a few years, they will even get a new arena. If anyone can pull that off, it’s Knight, who already has a basketball tournament with his name on it regularly played at the Moda Center.