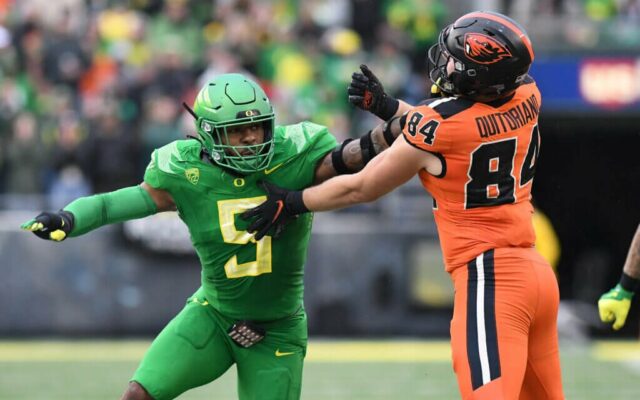 As the NFL Draft takes place this week in Las Vegas from April 28th-30th, several players with ties to the state of Oregon will hope to hear their names called.

Thibodeaux spent three seasons at Oregon and showed incredible flashes of talent.  The former No. 1 overall recruit may be best remembered by his performances in Oregon’s two Pac-12 Championship victories, posting a combined 18 quarterback pressures, 10 tackles, 4 1/2 tackles for loss, 3 1/2 sacks, and a blocked punt in victories over Utah and USC. Thibodeaux should be one of the first names called, but can fall anywhere inside the top 10. Some mock drafts have him going as early as No. 2 to the Detroit Lions, while others have him falling outside the top 5.

“The General” spent three seasons as a leader and playmaker in the secondary for the Ducks. McKinley broke out as a superstar this past season, tying for the FBS lead in interceptions (6) and being named one of three finalists for the Paycom Jim Thorpe Award, given to the best defensive back in college football. McKinley’s football IQ and ballhawking skills should make him a coveted DB prospect in this year’s draft. Expect him to get selected between rounds 3-5.

Verdell’s game-winning touchdown run against Washington will forever be engrained in Oregon football history. However, the 5’8″ running back accomplished a whole lot more in his four seasons in Eugene. Verdell rushed for back-to-back 1,000 yard seasons in 2018-2019, posted 2,929 career rushing yards, and 27 career rushing TDs. Verdell’s stock as an NFL prospect may have taken a hit after his season-ending leg injury suffered last season against Stanford. Verdell will hope to hear his name called on day three of the draft.

Quitoriano was a local standout at Sprague High School in Salem before taking his talents to Corvallis. He started 30 games in his career for the Beavers, racking up 40 receptions for 512 yards and six touchdowns. Watch for the local product to hear his name called on day three of the draft.

Turner elected to take his talents to the Mountain West at Nevada after dominating at Clackamas High School. After playing a minor role during his first two seasons in Reno, Turner earned all-conference honors during his final two seasons. Turner should hear his name called during day three of the NFL Draft. Turner appeared on John Canzano’s Bald Faced Truth (weekdays 3-6 p.m. on 750 The Game) earlier this week.

After starring at Westview High School, Toure emerged as one of the best receivers in the FCS early in his career at Montana. During his junior season in 2019, Toure led the Big Sky and was second in the FCS with a school-record 1,495 receiving yards on 87 receptions. Toure finished his career at Montana with 155 receptions for 2,488 yards and 20 touchdowns, ranking top-12 in Montana history in both categories. Toure transferred to Nebraska to show his capabilities at the Big Ten level, and led the Huskers in receiving during the 2021 season. Toure may hear his name called on day two of the draft, but day three looks like a better bet.

Other names to watch