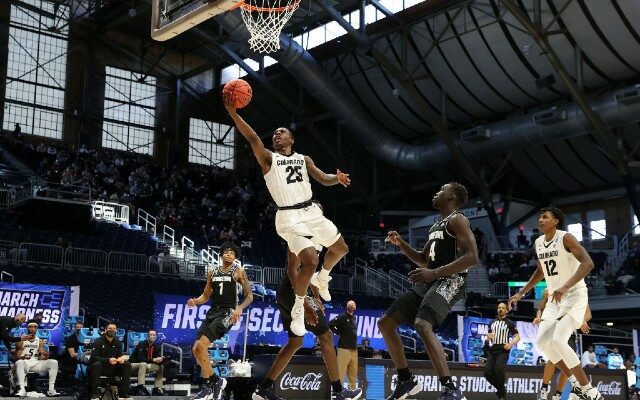 After a flurry of upsets on day one of the tournament, the second day of first round action began with the opposite.  Are there more upsets in store?  Check here for regular updates throughout the NCAA Tournament, and  listen live to all the play by play action exclusively on 750-AM, 750TheGame.com, and streaming  on the Radio.com App and iHeart Radio App from Westwood One.

Abilene Christian wins its first ever Men’s NCAA Tournament game. Thanks to two clutch free throws from Joe Pleasant, oh and they were his only free throws of the whole game. The Wildcats defense was smothering all night long, and it felt like there were six of them on the court at times.

The Bruins win keeps the Pac-12 undefeated in the NCAA Tournament. Despite injuring his ankle in UCLA’s First Four game, Johnny Juzang poured in a game-high 27 points on 10-of-16 shooting. The Bruins will face (14) Abilene Christian.

The Bulldogs were dominant throughout the game over NSU. Corey Kispert led the Zags with 23 points. He was one of four Bulldogs in double figures. The win keeps Gonzaga unbeaten, and its the most points a team has scored in the tournament so far. Up next, Gonzaga faces (8) Oklahoma.

The Sooners trailed 55-54, but after two free throws to take a 56-55, they never trailed again. Oklahoma had three players score at least 16 points. Austin Reaves led the way with 23 points; Elijah Harkless had a double-double (16 points, 10 rebounds); and Brady Manek finished with 19 points. Oklahoma will face either No. 1 overall seed Gonzaga.

Maryland finished off UConn thanks to a big day from Eric Ayala. He really stuffed the stat sheet with 23 points, five rebounds, three steals and two assists. The Terps move on to face No. 2 seed Alabama.

Ohio knocked out the defending champs thanks to a full-team effort. Ben Vander Plas had the game-high 17 points, but it was Jason Preston who stole the show with a near triple-double: 11 points, 13 rebounds and eight assists. Ohio moves on to face Creighton.

The Hawkeyes had little trouble with Grand Canyon, as National Player of the Year candidate Luka Garza finished with 24 points, six rebounds, two steals, an assist and a block. They will advance to face Oregon.

The Ducks move on to the Round of 32 to face Iowa after VCU had multiple positive COVID-19 tests return, so the Rams are out of the NCAA Tournament.

The Crimson Tide got all they could handle from Rick Pitino and the Iona Gaels, but Alabama is moving on to the second round to face (10) Maryland.

Creighton scores the go-ahead free throws late, and USCB narrowly misses a game-winner at the rim.  The Blue Jays advance, making it three wins for the 5-seed against the 12-seed in this year’s March Madness. Oregon State is the lone 12-seed to pull off the much-anticipated 12-5 upset. Creighton will battle No. 13 Ohio after they upset Virginia.

Wolverines, the top-seed in the East, advance to the second round where they face (8) LSU on Monday.

Tigers, runners-up in the SEC Tournament, advance to the second round to face the top-seed Michigan Wolverines.

Despite leading by eight at halftime, the Big Sky Champion EWU Eagles  could not hold off a resurgent Jayhawks squad down the stretch.  Kansas advances to face (6) USC in the second round.

Florida State advances to face (5) Colorado in the second round.

The Buffaloes made 16 of their 25 three-point attempts, with forward Jabari Walker connecting on all five of his attempts from beyond the arc, as the Buffaloes dominated the Hoyas to advance to the second round.   Colorado’s victory made it a 3-0 showing for the  Pac-12 to date in the Tournament, along with (11) UCLA’s play-in victory over Michigan State, and the 12-seed Oregon State Beavers taking down the 5-seed Tennessee Volunteers on Friday. (6) USC will face (11) Drake later today, UCLA will face (6) BYU, and the 7-seed Oregon Ducks will take on 10-seed VCU Saturday night.