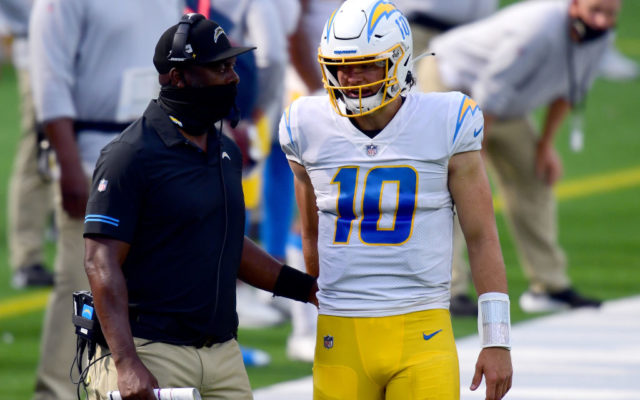 “He has impressed from the very beginning,” Lynn said. “I just liked the way he handled [his first start] and everything he’s done afterwards.”

“I think he’s shown the consistency that you look for, especially in a rookie quarterback, and he’s made some pretty nice throws too,” he added.

Obviously, this is great news for the former Oregon Duck, who has started the Chargers last three games after then-starting QB Tyrod Taylor’s lung was punctured by a team doctor.

Through three games, Herbert is playing pretty well, completing 72% of his passes for 931 yards and five touchdowns. Unfortunately, he hasn’t won a game yet. The good news is the Chargers were in every game.

LA lost to Patrick Mahomes and Kansas City in Herbert’s surprise NFL debut by just three points. Then, they fell to Carolina by five. Last week, the Chargers held a big lead (24-7) before ultimately falling to Tom Brady and Tampa Bay by seven.

The only blemishes on Herbert so far are his turnovers (three interceptions and a fumble).

His first interception, against Kanas City, he threw a ball across his body into double coverage. Then, last week his lone interception came as the Chargers tried to make their comeback after TB took a 38-31 lead.

“I think this young man’s just going to continue to get better, and I know we can win with him. I believe that,” Lynn said. “We haven’t done it yet, but I do believe those wins are coming.”