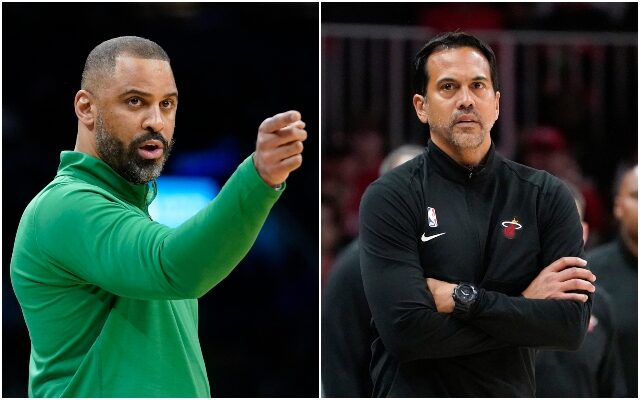 A Portland native will be a head coach in this year’s NBA Finals.

The only question is: which one?

The Rose City is strongly represented in the Eastern Conference Finals between the 2-seed Boston Celtics and top-seed Miami Heat.

Erik Spoelstra, Miami head coach, is no stranger to the spotlight.  He is in his 14th season as head coach of the Heat, coaching in his 11th postseason, and is trying to reach the NBA Finals for the second time in three years.  Spoelstra helped guide the LeBron-D Wade-Bosh Big 3 to four straight appearances in the NBA Finals (2011-14), winning two rings.

Spoelstra’s father, Jon, was an executive with the Portland Trail Blazers from 1979 to 1989 as senior vice president and general manager.  Erik attended grade school and middle school in the Beaverton area (Raleigh Hills elementary and Whitford Jr. HS) before attending Jesuit High School and starring at point guard.  He went on to attend University of Portland and play basketball, donning the jersey No. 30 in honor of Trail Blazers great Terry Porter.  In four seasons on The Bluff, Spoelstra averaged 9.2 points and 4.4 assists, playing for head coach and former Blazer Larry Steele.  At UP, Spoelstra was teammates with Eric Mobley, current USC Trojans assistant coach and father of rising NBA star Evan Mobley of the Cleveland Cavaliers.

Spoelstra took a job with the Miami Heat in 1995 as a video coordinator.  He built a reputation as a hard worker, and drew the attention of Pat Riley.  Eventually, Riley hand-picked Spoelstra to replace him as head coach of the Miami Heat after the 2008 season, and Spoelstra has kept the job ever since.

Ime Udoka is in his first season as head coach of the Boston Celtics.  He, too, grew up in Portland, attending Jefferson High School.  He played his final season of college basketball at Portland State, leading the Vikings 1999-00 squad in points (14.5), rebounds (7.3), and steals (1.6).  Udoka went undrafted in the 2000 NBA Draft, played in the D-League, played internationally, and saw minutes in a combined 12 NBA games leading up to signing with his hometown Portland Trail Blazers in 2006.

Udoka played and started 75 games for the 2006-07 Blazers, a team that finished 32-50 under second-year head coach Nate McMillan, but had a bright future with rookie of the year Brandon Roy and promising forward LaMarcus Aldridge, both of whom the Blazers acquired in the 2006 NBA Draft.  Udoka averaged 8.1 points and 3.7 rebounds that season in Rip City.

Udoka played another four NBA seasons between stops with the San Antonio Spurs and Sacramento Kings.  Gregg Popovich hired Udoka as an assistant coach with the Spurs in 2012, and together they won the 2014 NBA Finals in five games over Spoelstra’s Miami Heat.

Udoka reportedly played a sizeable role in convincing LaMarcus Aldridge to leave Portland and sign with San Antonio as a free agent in the summer of 2015, as the two were teammates in Aldridge’s rookie year in Portland.

After eight seasons as an assistant under Popvoich, Udoka spent one season each as an assistant with Philadelphia and Brooklyn before being hired by the Celtics to replace Brad Stevens as head coach, following Stevens resignation and move to the team’s front office.

In his debut season, Udoka’s Celtics were slow out of the gate, holding a 17-19 overall record at New  Year’s Day.  But since February, the team has been one of the best in the league, and reinforced their reputation as one of the toughest outs with a first-round series sweep of Kevin Durant and the Brooklyn Nets, followed by Sunday’s emphatic Game 7 victory to eliminate Giannis Antetokounmpo and the reigning champion Milwaukee Bucks in a classic second-round series.

Portland has not had much to root for this basketball season.  But seeing two of its own, Udoka and Spo, battle it out on the national stage, a trip to the NBA Finals on the line, is worth celebrating.

The ties run even deeper thanks to Udoka having fellow Portland natives Damon Stoudamire and Aaron Miles on his coaching staff in Boston.  And, of course, West Linn star and former Oregon Ducks point guard Payton Pritchard contributes important minutes off the bench.

Game One of the Eastern Conference Finals is Tuesday, May 17th at 5:30 p.m.  The entire series will be broadcast on ESPN/ABC.

For the Blazers, they decided not to interview Udoka for their vacant head coach position last offseason, a job that predictably was given to Chauncey Billups by soon-to-be-fired GM Neil Olshey.

Portland is in the NBA Draft Lottery after missing the playoffs for the first time since the 2012-13 season.  As a result, Udoka and the Celtics boast the league’s longest-running playoff streak at eight straight seasons.

Portland will discover the landing spot of its first-round pick at the Draft Lottery on Tuesday night, before Udoka and Spoelstra take center stage in Game One of the Eastern Conference Finals.