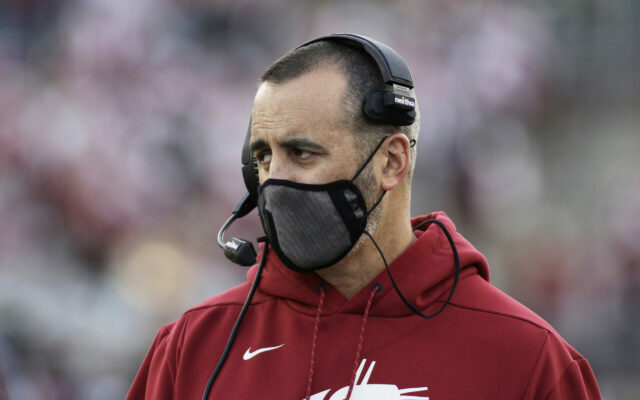 FILE - Washington State coach Nick Rolovich watches during the first half of an NCAA college football game against Stanford on Oct. 16, 2021, in Pullman, Wash. The former Washington State football coach has filed a claim against the university on April 27, 2022, seeking $25 million for wrongful termination after he was fired last year for refusing to get vaccinated against COVID-19. (AP Photo/Young Kwak, File)

Former Washington State head coach Nick Rolovich has filed a wrongful termination claim against the University for $25 Million.  Rolovich was fired in Oct. 2021 for failing to get vaccinated against COVID-19.

Washington governor Jay Inslee gave a mandate in 2021 for state employees to receive a COVID-19 vaccine.  Rolovich filed for a relgious exemption citing his Catholic beliefs, but his request was denied.

The office of risk management for the state of Washington filed the claim on Rolovich’s behalf, according to the Seattle Times.

The claim was filed on April 27th, 2022, and is likely a precursor to an official lawsuit being filed by Rolovich, who had to wait 60 days after filing the claim to to sue.  It has been 105 days since the claim was filed as of Wednesday, August 10th, but Rolovich had yet to officially file a lawsuit.

Rolovich went 5-6 in 11 career games coaching the Cougars.  He was in the second year of a five year contract, with three years remaining that would earn him $3.2 Million a year, making him at the time the highest paid employee in the state of Washington.