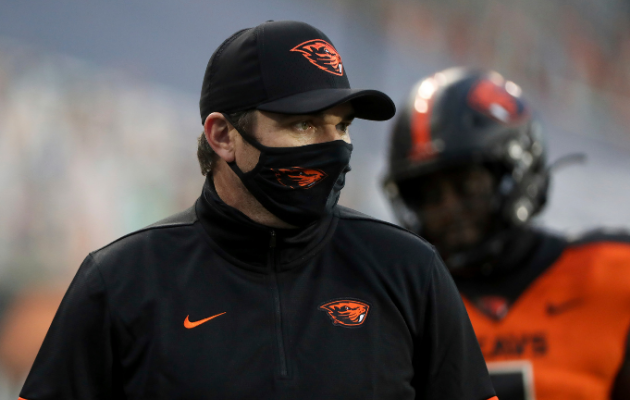 Oregon State football received a big verbal commitment on Thursday for their 2022 class in ESPN No. 2 center Dylan Lopez.

Before ending up at the IMG Academy (Bradenton, Florida), Lopez played at Rancho Verde HS (Moreno Valley Calif.) for his first three years.

The 6-foot-2, 285-pound stud lineman made his official visit to OSU on June 11, and that’s where the Beavs closed the deal.

Lopez had narrowed down his choices to Cal and Oregon State, but he was going to wait to decide until he visited both schools, according to The Oregonian. Clearly, the Beavs made a good final impression.

“Oregon State was great. I think the biggest thing that got to me was the unity of the staff. Everyone on the staff – from the coaches to the recruiting department guys – everyone was in unison. They really had that family vibe, when you talk about how they interacted with each other. Instantly, they took me and my family into that environment, and being themselves. It felt great.” – via The Oregonian

ESPN lists Lopez as a four-star prospect while Rivals and 247Sports have him as a three-star recruit.

Lopez collected offers from schools throughout the country including Kansas, Michigan State and Syracuse. He also had offers from five other Pac-12 schools — Arizona State, Cal, Colorado, Washington State and USC (where he originally committed last November).

“I’m really excited and feel great about my decision,” Lopez said. “This was a business decision for me and I really feel like Oregon State was the perfect spot for me.

“I think I can come in and make an impact and the depth chart sets up pretty well for me. They’re not super deep at center and that’s where they like me so I’m looking forward to the opportunity of coming in and competing right away.” – via 247Sports