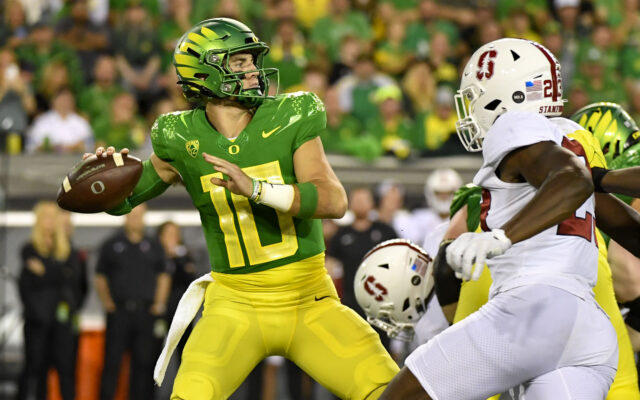 The Oregon Ducks remained perfect in Pac-12 so far with a convincing 45-27 win over Stanford.

Oregon (4-1, 2-0 Pac-12) led 10-3 midway through the second quarter when Bo Nix and Bucky Irving combined to lead an eight-play, 75-yard touchdown drive. On the ensuing possession for Stanford (1-3, 0-3), Safety Bennett Williams forced a fumble by Ben Yurosek and Noah Sewell returned it 21 yards to the four yard line to setup  Bo Nix for his first of two rushing touchdowns on the night.

But it was the second rushing touchdown that had everyone at Autzen in a frenzy; an 80 yard sprint down the sideline in the 3rd quarter. Nix also threw for two more scores and completed 16 of 29 passes for 161 yards and led Oregon with a career-best 141 yards rushing on six carries. Oregon had 351 yards on the ground compared to Stanford’s 127.

With the win, the Ducks moved up to 12th in the AP Top-25, one spot behind conference rival Utah. Oregon now prepares to take on Arizona Saturday at 6pm.