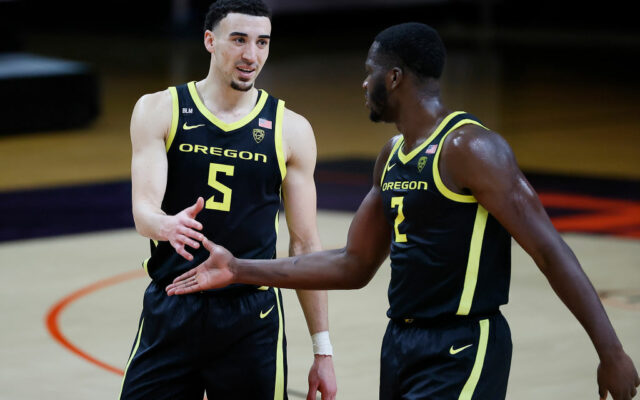 Is there a hotter men’s basketball team than the Oregon Ducks in the Pac-12? Nope.

Oregon has won their last five games, including Sunday’s double-digit win (80-67) over Oregon State. The Colorado Buffaloes, who have won four straight, are the closest team to the Ducks current hot streak.

Against the Beavs, Will Richardson led the way with 22 points, including 6-of-7 from three, in 40 minutes. He also had three rebounds and three assists.

All five starters for the Ducks scored in double figures. Eugene Omoruyi poured in 18 points, Eric Williams Jr. had 14 while both Chris Duarte and LJ Figueroa each contributed 10 points.

Thanks to the win, Oregon clinched the No. 1 seed in the Pac-12 Men’s Basketball Tournament, which gets started on Wednesday. The Ducks won’t play until Thursday, thanks to the bye each of the Top 5 Seeds get this year.

Usually the Top 4 teams get a bye, but Arizona is not in the conference tournament after their self-imposed ban from postseason play, so only 11 teams are in the Men’s Pac-12 Tournament.

Now, if you look at the standings, you’ll see that Oregon and USC are “tied” in the games back category. However, the Ducks have the higher win percentage to give them the top spot.

Four of the last six years, Oregon has earned at least a share of the regular-season title. This is the Ducks third No. 1 seed in that span.

Oh, and then there’s this:

Oregon’s first game will be in Round Two on Thursday at 11:30 a.m. on the Pac-12 Networks. The Ducks will face the winner of Wednesday afternoon’s No. 8 Arizona State-No. 9 Washington State game.