Chiefs Come From Behind Again, Punch Their Ticket to Super Bowl LIV with 35-24 Win 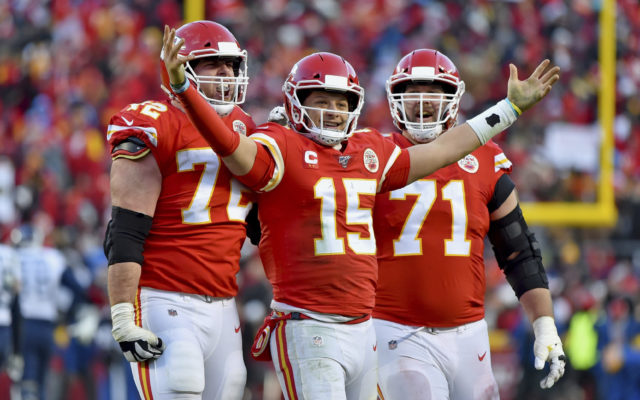 The Titans received the ball to open the game, and Derrick Henry went right to work with a 5-yard run. Ryan Tannehill found the rookie A.J. Brown for a 37-yard pass play, and the Titans were moving early.

Tennessee moved the ball all the way to the Kansas City 12 yard line, but on third and six the Chiefs defense got a rare red zone stop to force an early field goal, making the score 3-0 Titans.

Patrick Mahomes and the Chiefs offense had a chance to answer the Titans opening drive, but were stopped on three straight plays. The stop for Tennessee forced the Chiefs defense to get right back on the field, hoping to slow down the train that is Derrick Henry.

On a second and five play from the Kansas City 42 yard line, Tannehill is nearly intercepted but after review the ball had hit the ground. Titans maintained possession, and on the very next play the Chiefs jumped off sides to hand Tennessee a first down.

On the same drive, the Titans faced a fourth and two situation. Mike Vrabel decided to roll the dice, and Tannehill hit Humphries to move the chains. Two plays later, Henry lined up by himself in the backfield, took the snap and rumbled into the end zone to give the Titans a 10-0 advantage in the first quarter.

The Chiefs needed to find some answers on their next possession. Titans had run 16 plays to the Chiefs 3 at that point in the game. Andy Reid dialed up a lot of misdirection and jet sweeps to keep the Titans defense on their heels.

Kansas City also faced a fourth down play, and were able to convert to keep the drive alive. The Chiefs capped off a 10-play 74-yard drive on a jet sweep play to Tyreek Hill, who ran it into the left corner of the end zone. The play was technically a passing touchdown for Mahomes, and the Chiefs cut the lead to 10-7.

The score remained 10-7 Titans as the first quarter came to a close. Derrick Henry and the Titans offense went back to work against a Chiefs defense that was already getting worn down.

On third and twenty-two, Kansas City was called for a brutal pass interference call, which gave Tennessee another first down opportunity in the red zone. They took full advantage, capping off a 15-play drive when Tannehill tossed a touchdown pass to the big man, Dennis Kelly (Titans offensive tackle).

Just when you thought the Titans took full control over the game, Kansas City put together a quick answer on offense. Mahomes threw on every play, finishing off the 5-play drive on a 20-yard touchdown strike to the speedster, Tyreek Hill. The score was Hill’s second of the first half.

Things continued to go downhill for Tennessee as the first half came to a close. Their offense was forced into a rare three-and-out, as Mahomes and the Chiefs offense began smelling blood.

Kansas City had a chance to take the lead before halftime, and they did just that. On second and ten at the Titans 27 yard line, Patrick Mahomes made an MVP play. Mahomes avoided the rush, scrambled to his left, and was able to tip-toe the sideline as he made his way toward the end zone, dragging a defender in for the go-ahead score.

As well as the Titans had played in the first half, they found themselves trailing 21-17 at the break. The Chiefs would also receive the second half kickoff.

Tennessee did their job on defense to prevent any further damage on the Chiefs first possession of the second half. It was up to Henry and the offense to try to regain the momentum, but a costly holding penalty on third and one pushed them backwards and they were unable to convert.

As the third quarter came to an end, the score remained 21-17. Kansas City was on the move to begin the final quarter of play. On second and goal, Damien Williams took the carry around the right side and scored to give Kansas City a commanding 28-17 lead. The touchdown play capped off a 13-play, 73-yard drive, that ate up over seven minutes of clock.

With the Titans down double digits, it seemed that the game plan had to change in order for them to get back in it and hang tight with the Chiefs explosive offense. On their next possession, Derrick Henry didn’t see the ball once. Tannehill was sacked on third down after three straight passes, and the Titans had to punt it away.

On the Chiefs next possession, they started deep in their own territory at the 13 yard line. Sammy Watkins got involved on a couple throws to get them near midfield. Then another three man rush by the Titans defense allowed Mahomes way too much time, as he target Watkins once again on a deep 60-yard touchdown bomb.

The touchdown for Watkins looked like the dagger, as Tennessee was struggling to get anything going after taking the early 17-7 lead. Mike Vrabel set up a nice play design on a fake punt play deep in their own territory to keep the comeback alive.

Tennessee moved the ball all the way to the Kansas City 22 yard line, and completed the drive with a 22-yard touchdown pass from Tannehill to Firkser. The scoring drive took just three minutes to go 80 yards. The score was 35-24 with just over four minutes to play.

The Titans elected to kick deep to Kansas City, relying on their defense to make a crucial stop. On third and ten, Mahomes tried to find Mecole Hardman deep but was unsuccessful. However, the defender did not turn his head around quick enough while defending the pass, resulting in a huge pass interference call.

Tennessee’s defense would eventually get a stop and had one more chance to keep their Super Bowl dreams alive. On a fourth down play, Tannehill scrambled to get away from the rush but was tripped up at his own 18 yard line. The Chiefs defense held, and the 50-year Super Bowl drought for Kansas City came to an end.