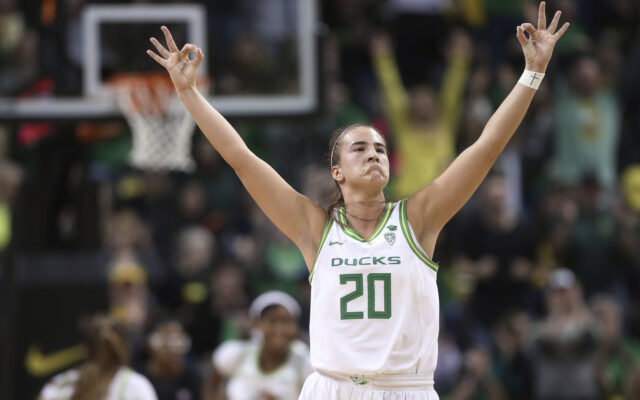 The news is out – Portland finally has landed a Women’s Final Four in 2030.

In his most recent column, our own John Canzano shared where his mind went when he heard the news:

Portland finally got a big win. It will host the 2030 NCAA Tournament Women’s Final Four. The news broke on Monday morning. I don’t know what your first thought was, but my mind darted to Sabrina Ionescu.

The University of Oregon women’s basketball star had a magical senior season interrupted by the pandemic. The Ducks were on a terror that spring, winning 19 straight games. We watched them dribble circles around Stanford in the Pac-12 title game at Mandalay Bay Event center in Las Vegas.

I usually wait to make my travel plans. There was still the early rounds of the NCAA Tournament to be played. Then, a Portland Regional to win. But Oregon was playing so dominant, and with such confidence with Ionescu, that I opened my laptop as the confetti fell in Vegas and booked my flight to the Final Four in New Orleans.

The news isn’t just about Ionescu though, Canzano writes. It also is boon to the city and a testament to the work Kelly Graves and Scott Rueck are doing:

Portland badly needed a win. It got one on Monday. Economic impact: $25 million. Etzel and his team deserve a victory lap. So do the countless others who played roles behind the scenes. That includes Oregon State women’s basketball coach Scott Rueck and Oregon coach Kelly Graves.

Those two college coaches have built Final Four-caliber programs. The Beavers and Ducks have elevated the profile of women’s basketball, not just in the state of Oregon, but in the Pac-12 as well. A piece of Monday’s win belongs to them, too.