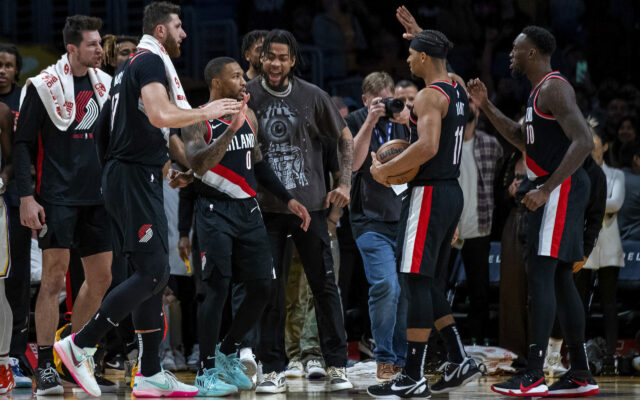 Portland overcame defensive lapses and a lack of movement on offense to rally and beat the Los Angeles Lakers 106-104.

Damian Lillard certainly did his part, racking up 41 points for the second straight game, including a game-tying 3-pointer with 12 seconds remaining that had him tapping his wrist and reminding Laker fans what time it was with the largely retired action. A blown defensive assignment led to an uncontested LeBron James dunk with seven seconds left on the clock, but Portland was able to call a timeout and run a sideline out play that got Jerami Grant the game winner at the rim with three seconds left, his second clutch go-ahead bucket in the first three games of the season.

As much as it feels like piling on, the Trail Blazers owe a debt of gratitude to Russell Westbrook. Once he checked in for the Lakers in the 4th quarter, the Trail Blazers went on a 16-6 run, sagging off him and daring him to shoot from outside – which Westbrook did several times, including a 1 vs. 4 midrange jumper with 21 seconds left on the shot clock and 30 seconds left in the game that left LeBron James and Anthony Davis both throwing up their hands in confusion.

The Trail Blazers join the Utah Jazz and Boston Celtics as the NBA’s only remaining unbeaten teams.

Up next for Portland – they host the Denver Nuggets and back to back MVP Nikola Jokic Monday night at 7pm on NBA TV. The Nuggets are favored by 4.5 points.