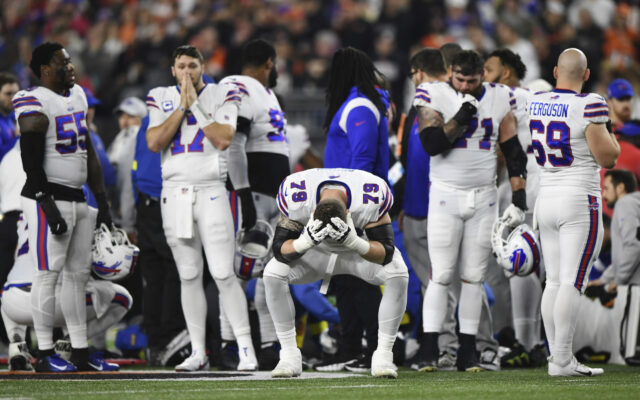 Buffalo Bills offensive tackle Spencer Brown (79) pauses as Damar Hamlin is examined by medical staff during the first half of an NFL football game against the Cincinnati Bengals, Monday, Jan. 2, 2023, in Cincinnati. (AP Photo/Emilee Chinn)

The Monday Night Football game between the Buffalo Bills and Cincinnati Bengals has been postponed, the NFL announced.

Bills safety Damar Hamlin collapsed after making a tackle on Cincinnati’s Tee Higgins midway through the first quarter.  Hamlin was immediately attended to by training staff.  An ambulance came on the field and Hamlin reportedly was administered CPR.  The ambulance transported Hamlin to the University of Cincinnati Medical Center.

The NFL issued a statement announcing the postponement and that Hamlin was in critical condition.

The NFL has officially postponed play for tonight, per Commissioner Roger Goodell.

Game is suspended. Bills and Bengals have left the field.

This story will be updated as news develops.