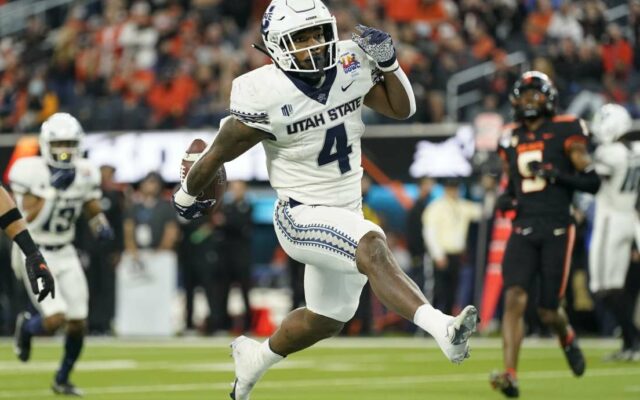 Oregon State’s season comes to a bitter end Saturday night after dropping the Jimmy Kimmel LA Bowl 24-13 at SoFi Stadium. The LA Bowl was the Beavers first postseason appearance since the 2013 Hawai’i Bowl and just like 2013, Oregon State scored on the first drive of the game.

It was fireworks less than a minute in: three plays, 71 yards, and a score. It may have been scripted to perfection but every Beaver player executed. Oregon State QB Chance Nolan compiled 39 of his 263 yards on his first toss; Jesiah Irish eventually finished the 58-second drive off with a 20-yard jet-sweep touchdown.

Talk about a perfect start in LA?! 3-plays and Oregon State is in… The jet-sweep for the Beavs gives OSU a 7-0 lead. #GoBeavs

After the score to make it 7-0 the Beavers slowed down and compiled just 133-yards for the remainder of the opening half. Oregon State’s through the first 15 minutes looked up to the challenge of keeping a premier passing attack at bay. The Aggie passing attack seemingly took an even bigger hit when starting QB Logan Bonner exited the game in the first quarter with a leg injury.

Up-step backup QB Cooper Legas. The three-star recruit from Orem, Utah hadn’t attempted a pass in college football before the LA Bowl but shocked many with what followed. His first play was a pinpoint TD pass to Deven Thompkins for 62-yards.

What showed further confidence from the Freshman Legas was Head Coach Blake Anderson mentioned that Legas checked out of the play that was initially called before the TD pass.

The Aggies scored again to close the half: 11 plays, 85 yards, and a rushing score. Calvin Tyler Jr. was the Aggie to run it in and if that name sounds familiar to Beaver fans, Tyler Jr. played 14-games for Oregon State before transferring to Utah State after the 2020 campaign.

The third quarter belonged to Utah State just like the second. On the opening drive, Legas looked even more comfortable leading the Aggies and marched Utah State down to the OSU eight-yard line. The Beaver defense bended but didn’t break holding the opening drive of the half to a field goal.

A double-pass trickplay saw Utah State gain 34 yards and some plays later Utah State finishes the drive with Brandon Bowling wide open in the endzone to make it 24-10.

Oregon State need to score some points here to keep Utah State’s attack off the field.

Even with Cooper Legas under-center, Utah State looked like the top-15 passing attack they were in the regular season. Alternatively, Oregon State was the number-12 rushing attack in the nation but got away from it in the bowl finishing with just 152 ground yards, 65 yards below their average.

Given deficiencies from their regular season identity, Oregon State still showed fight in the final quarter. The Beavers put together a five-plus minute drive that ended in a field goal after a 3rd down sack on Nolan. Minutes later Oregon State secured even more hope when they intercepted Legas for the first time in his career; unfortunately, Beaver WR Tre’Shaun Harrison fumbled the ball back to Utah State after three plays.

Oregon State’s defense played well enough to keep the Beavers in the game but poor play in the first three quarters caught up to Oregon State who ran out of time to blaze a comeback.

From a conference perspective, Oregon State was the only Pac-12 side that was favorites to win their respective bowl game, it will be an uphill climb for a conference that went 0-2 in bowls last season.

Even with the disappointing LA Bowl result, 2021 should still be seen as a positive, and Oregon State is positioned to go higher from here. The Beavers open the 2022 campaign on September 3rd at Reser Stadium hosting Boise State.