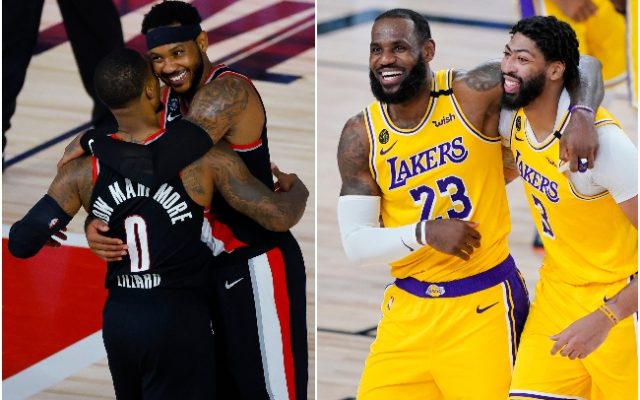 Photos by Getting Images.

The Portland Trail Blazers capped off an impressive run in the NBA restart, with a thrilling 126-122 victory over the Memphis Grizzlies on Saturday in the Western Conference play-in game. The win clinched a playoff birth for Portland, their 10th playoff appearance over the last 12 seasons. Portland has now made the playoffs in seven consecutive seasons.

The Portland Trail Blazers will face the Los Angeles Lakers in the first round of the playoffs in what could be the most entertaining opening series.

Damian Lillard knew this would happen before most thought it was possible.

As for the Los Angeles Lakers, they were one of the worst shooting teams in the NBA restart. Of the 22 teams in the bubble, the Lakers finished last in points per game (106.4), 19th in field goal percentage (43.8%), and last in three-point percentage (29.8%). During the regular season prior to the shutdown, Los Angeles led the league in field goal percentage, and they were 7th in points per game.

LeBron James and the Lakers finished with a 3-5 overall record in the bubble, and maybe more importantly a rough 1-7 record against the spread.

In Game 1 of the Western Conference playoff series between Portland and Los Angeles, we will see just how fatigued the Blazers are after rattling off four consecutive wins (6 of the last 7) to keep their season alive. Their only loss in that seven game stretch coming against the Los Angeles Clippers, when Damian Lillard missed crucial free throws down the stretch that could have sealed the game for them.

Damian Lillard has been named the bubble MVP. His stats in Orlando:

The Blazers will lose some depth in Game 1, as they will be without PF Zach Collins (ankle). Wenyen Gabriel, the 23-year-old Forward from Kentucky is set to get the start for Collins. Gabriel has played a total of 33 minutes in the bubble, and will have a tall task against arguably the best PF in the game, Anthony Davis.

How much more will Damian Lillard have left in his tank, and how will the Blazers adjust with having the depth of Zach Collins coming off of the bench? Those are a couple of the big questions heading into Game 1 tonight against the Los Angeles Lakers.

My personal take is that we will see some tired legs from the Blazers in the first half especially, which leads me to believe the Lakers will score early and often (they can’t shoot as bad as they did during the restart, right?). Let’s hope Portland will be able to tighten things up in the second half if that is the case, but it wouldn’t be surprising to see more of what we saw from the Lakers prior to the shutdown and less of what we’ve seen so far in the bubble.