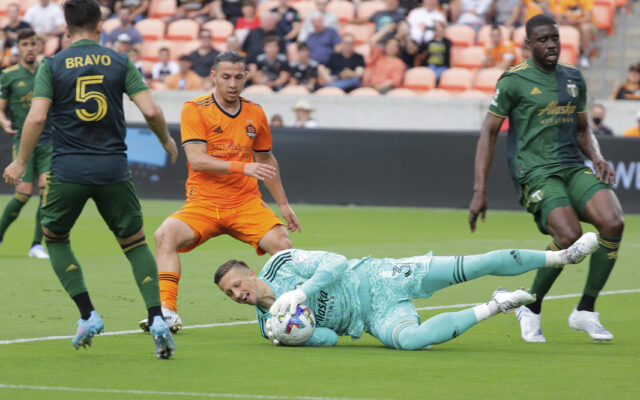 The Portland Timbers withstood a charge from Houston Dynamo, then played up a man for 15 minutes plus added time, but ultimately settled for a scoreless 0-0 draw in Texas on Saturday afternoon.

Timbers goalkeeper Aljaz Ivacic made a trio of big saves in the first half, including a one-on-one stop on Dynamo attacker Fafa Picault.

In the second half, Ivacic again denied Picault, whose header off a set piece in the 64th minute seemed destined for the bottom right corner, but Portland’s netminder sprawled to parry it off the post.

The two sides remained scoreless through the first half and into the second half.

The host Dynamo went down a man when center back Teenage Hadebe was issued a second caution in the 76th minute.  Portland played up a man the rest of the match.

The Timbers were not able to capitalize with the man advantage through ninety minutes, and six minutes of stoppage time were added.  Eryk Williamson appeared off the bench and delivered a dangerous shot that was blocked and out for a corner kick.  Moments later, Yimmi Chara and Marvin Loria combined for a Chara shot that went wide just prior to the final whistle.