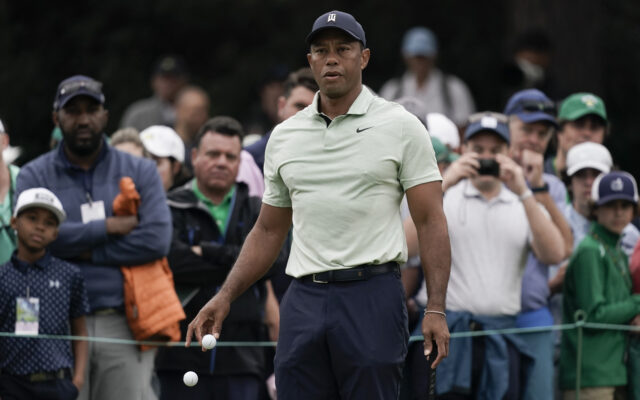 Tiger Woods drops golf balls on the driving range during a practice round for the Masters golf tournament on Tuesday, April 5, 2022, in Augusta, Ga. (AP Photo/Charlie Riedel)

It’s Masters week at Augusta National, and somehow, some way, Tiger Woods says as of now he plans to play in the tournament.

Woods spoke with the media Tuesday and was asked if he felt he could win this weekend.

The Masters will be Woods first official PGA Tour event since he played in The Masters in November 2020 nearly eighteen months ago.  That year’s tournament was postponed by the pandemic, and Woods finished tied for 38th.  In 2019, though, Woods provided one of sports greatest moments by winning The Masters for his first major victory in eleven years.

Woods says he will play nine more holes on Wednesday before determining once and for all if he can tee it up Thursday.

The tee times and groupings have been announced for the first and second rounds.  Tiger would be playing alongside Louis Oosthuizen and Joaquin Niemann, teeing off at 7:34 a.m. (PST) Thursday morning.