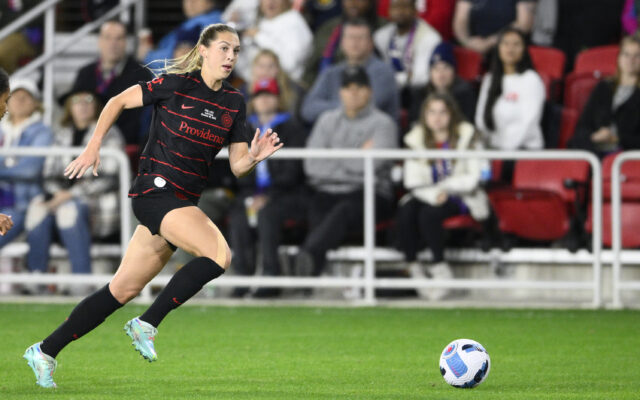 Portland Thorns FC today announced that forward Morgan Weaver has signed a new contract with the club through the 2024 season with an option for the 2025 campaign.

“Weaver is a big part of our future plans, and we all believe this is an environment she can continue to grow and develop in to reach her goals,” said Karina LeBlanc, Thorns FC general manager. “Weaver is an electrifying player that always gives everything for this club. She has captured the hearts and minds of the fans with her performance on the field, but also because of who she is away from it, and we are elated she has made a long-term commitment to this club.”

In the 2022 regular season, Weaver made 20 appearances (13 starts) for Portland, tallying the second-most goals on the team (7), while adding three assists. The 25-year-old forward earned NWSL Team of the Month honors in July with a goal and two assists, including her first multi-goal contribution performance (1g, 1a) against NJ/NY Gotham FC on July 16. She also notched her first career brace on Sept. 25, lifting Thorns FC to a 3-0 victory in their regular season home finale against the Chicago Red Stars. Weaver finished the season with the third most non-penalty expected goals in the league (7.31), as well as tied for fourth in shots (58) and was one of 10 players in the NWSL to tally 10 or more goal contributions.

“We’ve really seen Weaver step up this year. She’s always been known for her energy, the excitement of what she does on the ball, and the hard work she puts in, but this year we really got to see even more of her as a complete player,” said Thorns FC head coach Rhian Wilkinson. “The control she has going at extreme speed, how she sets up her teammates, and the amazing whip she has on the ball from long range. She really showed how many tools she has to her game and that includes sometimes being the last defender back because she will do it all for her team.”

Since joining Portland in 2020, Weaver has played in 65 matches (39 starts) across all competitions for Thorns FC, tallying 12 goals and seven assists. In that span, Weaver has helped Portland win the 2020 NWSL Community Shield, 2021 NWSL Challenge Cup, 2021 Women’s International Champions Cup, 2021 NWSL Shield and the 2022 NWSL Championship title. Weaver debuted for the U.S. Women’s National Team on Nov. 26, 2021, against Australia and has two caps under her belt.

The No. 2 pick in the 2020 NWSL Draft, Weaver racked up 43 goals and 12 assists in 85 appearances (85 starts) as a four-year starter at Washington State University (2016-19). In her final collegiate season, Weaver was named a Third Team All-American by the United Soccer Coaches and a Second Team All-Pac-12 honoree after leading her team to the College Cup.