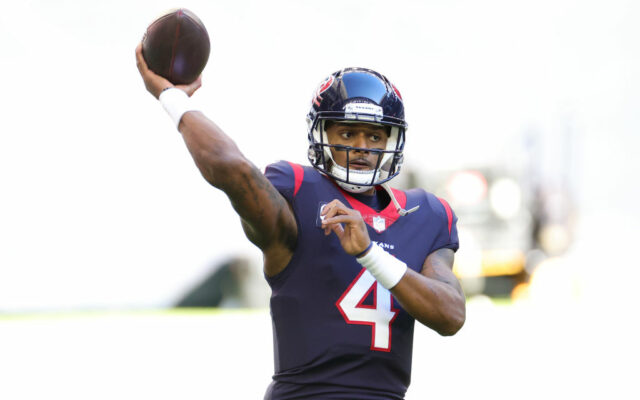 The Houston Texans introduced David Culley as their next head coach on Friday. Before Culley spoke, new general manager Nick Caserio made it clear what Houston plans to do with QB Deshaun Watson.

Texans’ GM Nick Caserio: “Before we take a few questions: Organizationally, we want to reiterate our commitment to Deshaun Watson. We have zero interest in trading the player.”

Good luck with that. Deshaun Watson is gone. He officially requested a trade on Thursday.

Even if he just chooses to sit out, Watson is done in Houston. He sees the writing on the wall, and he knows the Texans are a bit of a joke. Caserio is just in denial about the situation or he just wants to save the QB’s trade value.

Again, good luck with that.

No word from Watson publicly. However, if Caserio and Culley think Watson is going to put up with the Texans and their buffoonery, they’ve got another thing coming.

Now it’s possible Culley could go full “used car salesman” and sell Watson on a return to Houston. I think it would take one hell of a pitch, but crazier things have happened.

Considering all the reports from people like ESPN’s Adam Schefter, Watson wants out no matter what so maybe nothing will convince him to stay.

Only Watson knows for sure.

In reality, the problem for Watson is his contract. He’s signed with Houston through the 2025 season (with a potential out after the 2023 season). Fortunately for Watson, he’s got a no-trade clause, so he can veto any trade.

According to reports, the New York Jets are at the top of Watson’s wish list — I know, I was surprised too — because of new head coach Robert Saleh. No offense to Saleh, because I love him as a coach, but there’s nothing that would make me want to go play for the dysfunctional Jets.

Several teams figure to be in the mix, and Watson reportedly won’t veto trades to “too many teams.” However, that feels like a negotiation tactic to allow the Texans to make a trade that benefits them too. He could still veto every trade until the team he wants shows up.

ESPN’s Bill Barnwell recently put together the possible scenarios for suitors to trade for Watson. In case you don’t have ESPN+, here’s a quick summary.

He eliminated 15 teams before including a single trade scenario.

Of the 17 teams left, Barnwell believes the “top 5” teams most likely to acquire Watson are in this order:

As a Broncos fan, PLEASE Denver go get Watson. As a non-biased sports writer, Watson getting coached by Kyle Shanahan? That sounds like a match made in heaven, sorry Seahawk fans.

At the end of the day, Caserio and Culley’s assertions on Friday provided a laugh regarding their approach to Watson and his future in Houston.