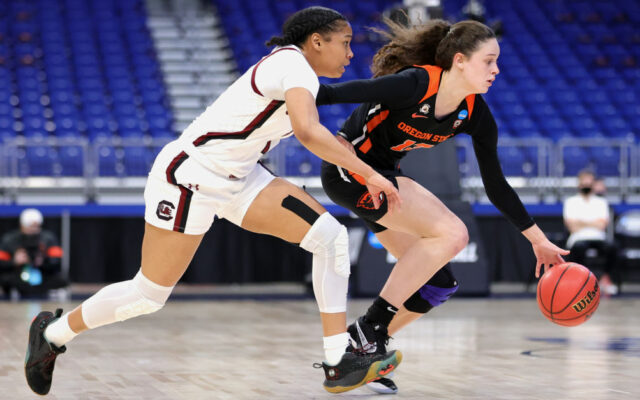 The No. 8 seed Oregon State women held strong with South Carolina, the top-seed in the Hemisfair Region, throughout the first quarter. In fact, the Beavs were an SC buzzer-beating layup away from leading after the opening frame.

South Carolina outscored the Beavs 16-5 in the second quarter and 23-11 in the third quarter. The Gamecocks won 59-42

Jones eventually fouled out, but still led the team in scoring with 13 points. Goodman shot just 26.7 percent (4-of-15) and finished with 10 points.

As for the Gamecocks, Aliyah Boston collected a game-high 19 points.

One of the bigger discrepancies came at the free throw line. Oregon State wasn’t always the one to initiate contact, but even when they did the calls didn’t always go their way.

The Beavs only shot six free throws — making three — while South Carolina shot 18, making 14. Obviously, that’s not enough to swing the game to Oregon State being the winner, but they certainly didn’t get nearly as many calls as they could have gotten.