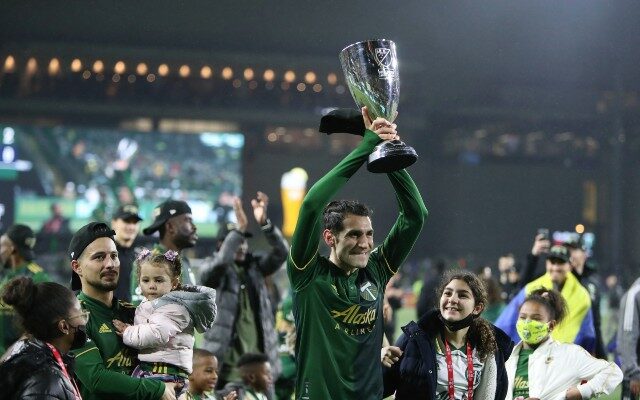 PORTLAND, Ore. – The Portland Timbers and club legend Diego Valeri have mutually agreed on the midfielder’s transfer to his boyhood club in Argentina, Club Atlético Lanús, both teams announced today. The Timbers legend departs the club after a stellar nine-year career with Portland.

In conjunction with Valeri’s transfer, Portland has agreed with Lanús to play a friendly testimonial match at Providence Park in 2023 where the midfielder will play one half for each team. Details about the match will be announced at a later date. Upon Valeri’s retirement, he will become an ambassador for the Timbers.

“I do not believe there has been a more impactful Designated Player signing in the history of MLS than Diego Valeri,” said Timbers owner and CEO Merritt Paulson. “He changed what clubs looked for in a DP – not a brand to put fans in the seats and sell sponsorships, but a rising European level talent who chose to make America his home and legacy. In Portland he has meant everything to us on the pitch and in the community. While one chapter ends today, this is not the end of Diego Valeri in Portland, and I cannot wait for fans to have the opportunity to properly honor him in person. Thank you, Diego. For everything.”

Valeri, 35, set and surpassed numerous club records in his nine seasons with the Timbers. After arriving to Portland in 2013, Valeri has become the Timbers’ regular-season leader in goals scored (86), assists (91) and points (263), and ranks second in team history in games played (262) and starts (230).

“I’d like to start by saying a resounding thank you to Diego, Florencia and their remarkable daughter, Connie, who have been an integral part of the Club for the last nine seasons. I can confidently say that there will never be another like Diego Valeri in green and gold. On the field, his performances helped change the trajectory of this club. Off of it, the humility and generosity he and his family showed the community has left a lasting impression on the entire city of Portland,” said general manager and president of soccer Gavin Wilkinson. “Though it has been one of the most difficult decisions that we have made as a club, we have worked with Diego to transfer him to his childhood club, Club Atlético Lanús. In conjunction with this transfer, we are finalizing plans to host a testimonial game for Diego in Portland. Knowing that our #8 will play one more game in the City of Roses, a place he called home for over nine years, is something that we viewed as vital to honor Diego and the mark he has left on the Portland Timbers family. We look forward to giving our fans the opportunity to see him take the field at Providence Park one last time. Diego Valeri is synonymous with Portland soccer. We thank Diego for his numerous contributions over the years as well as his tireless commitment to the club and know that he will be successful in all of his future endeavors – no matter where they take him.”

The Valentín Alsina, Argentina, native notched 100 goals and 104 assists in 306 appearances (265 starts) for the Timbers across all competitions. Valeri’s last goal with Portland was his 100th in Portland’s 2-1 win against LAFC on July 22 in 2021. Valeri’s honors with the Timbers include the Landon Donovan MLS MVP (2017), the MLS Newcomer of the Year (2013) and three MLS Best XI recognitions (2013, 2014, 2017). During his MVP campaign in 2017, Valeri’s season was highlighted by a team-record 21 goals and 11 assists, while he also recorded a goal in nine consecutive matches – an MLS record at the time. Valeri is the only player in league history to win Newcomer of the Year, regular season MVP and MLS Cup MVP. Notably, Valeri was the first player in Timbers history to earn MLS Cup MVP honors after scoring in Portland’s 2-1 win against Columbus Crew SC in the 2015 MLS Cup, helping the club secure its first MLS Cup trophy.

In 2020, Valeri became the third player in MLS history to record 80 goals and 80 assists in their regular season career. He recorded seven or more assists in each of his first eight seasons with the Timbers, joining Brad Davis, Preki and Marco Etcheverry as the only players in MLS history to record seven or more assists in eight consecutive seasons. Valeri helped Portland claim the MLS is Back Tournament title with a 2-1 win over Orlando City SC on Aug. 11, 2020. Later that year, Valeri was named to Major League Soccer’s The 25 Greatest, a platform that honors the 25 brightest stars in league history.

“There are no words to describe what Diego Valeri represents to the Portland Timbers and MLS. He gave being a Designated Player a new meaning, setting the highest of standards in the league. There aren’t many players that can be recognized for having the impact and consistency that Diego had with the Timbers. With his mastery of the ball, ‘El Maestro’ bestowed with his game and competitive nature what Portland needed to always be one of the most competitive teams in the league,” said Timbers head coach Giovanni Savarese. “It will be a strange feeling to not see him in our locker room. My wish as a head coach was to see him retire with the Timbers, but sometimes soccer works out in different ways. I wish Diego all the best in his return to Lanús, the club that saw him grow, and to his beautiful family, Florencia and Connie, in their return to Argentina. His humility and his soccer will always be synonymous to the Portland Timbers.”