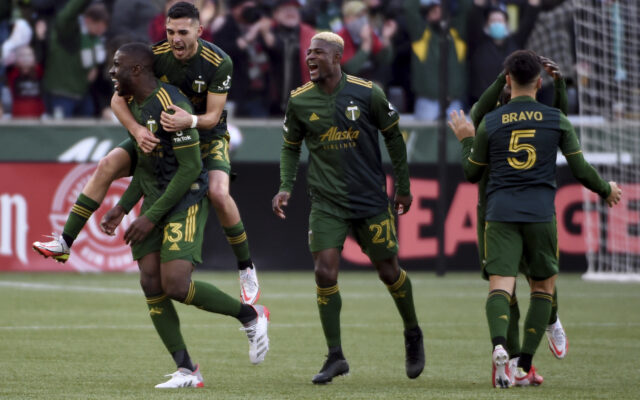 The Portland Timbers season stays alive after taking down Minnesota United 3-1 at Providence Park in the first round of the MLS Cup Playoffs. With the victory, Portland has a date with the Colorado Rapids on Thanksgiving Day at 1:30 PM.

While a home playoff game at Providence Park should always favor the men in green, there was some fear for Timber fans since Minnesota beat Portland on both regular season occasions this season. The start of the first-round playoff game went along that regular season script with Loon Winger Franco Fragapane tucking away the opening goal just 11 minutes in.

The Timbers were certainly aggressors in the opening 45 but fell short of putting anything on the scoreboard until an unlikely hero stepped up, Larrys Mabiala. The experienced defender flew high off a corner in the 44th minute to head in the equalizer for his first-ever playoff goal.

Portland had all the momentum going to halftime but unfortunately, just before the halftime whistle, Sebastian Blanco went down with an apparent hip injury. Blanco strongly rejected being carried off in a stretcher and was ready to go to begin the second half. Even Blanco at 80% is one of the best in the MLS.

Blanco was proceeded to be simply incredible. Soccer is a game with 11 on the pitch but the game-winning and sealing goals were moments of individual magic for the Argentinian star. Portland went ahead 2-1 in the 47th minute when Blanco charged down a poor-headed clearance and struck it first-time just inside the box.

19 minutes later, Blanco calmly received the ball 35-yards from goal and struck it after a dribble or two, he pierced the upper-right 90 of the net sending Providence Park into a frenzy.

Minnesota flew bodies forward for the final 20 minutes of the game and attempted to rile up Timber playoffs to try to create a spark, it wasn’t to be for the Loons.

Blanco was serenaded from the Timber faithful when he was subbed off just before full time and heart-and-sole of the Timbers attack will need to be influential again on Thursday afternoon at Colorado.