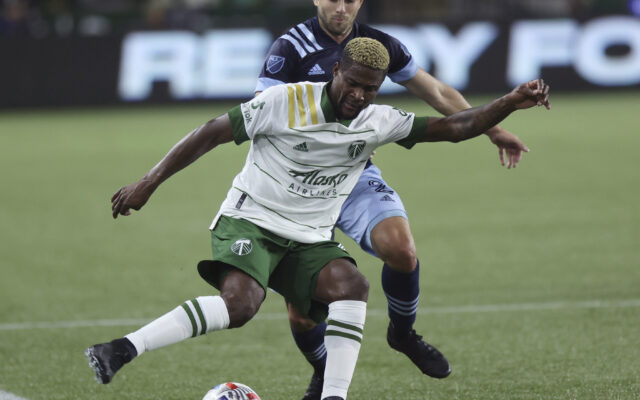 The Portland Timbers have lost their second game on the bounce after dropping 3-2 to the Vancouver Whitecaps Wednesday night at Providence Park.
Before the international break that concluded the previous weekend Portland was the hottest team in the MLS, the result against Vancouver looks greater to that of early-season struggles than postseason form.

Entering the match Portland was sitting comfortably in fourth even after a loss to the Galaxy while Vancouver was one point behind the playoff line in the Western Conference.

It was a tale of two halves: while each side shared 50% possession in the opening 45 minutes, Portland was far superior and grabbed the goals to prove it.

Yimmi Chara curled the first goal past Maxime Crepeau in the 15th minute for his sixth goal of the season.

Before the first half closed, Dairon Asprilla secured his 9th goal of the season to put Portland up 2-0 and all the momentum going into halftime.

The Timber collapse began when Deiber Caicedo strolled past the Timber defense and scored in the 63rd minute to reignite Whitecap hopes. Due to yellow-card accumulation Diego Chara wasn’t available for the match and his defensive excellence and certainly leadership were missed in the final 20 minutes of the game; the Whitecaps scored in the 76th and 81st minute.

Brian White scored the equalizer off a towering header to even the game up at two then in the 81st, Cristian Dajome finished off a penalty that Van Rankin conceded. After being shocked by the three unanswered goals, Portland was sloppy but had some chances off crosses into the plus-seven stoppage time.

Portland is now just four points from being out of the playoffs and Vancouver is narrowly above the playoff line with 43 points.

Given the importance of getting all three points to keep in playoff contention and scoring three unanswered on a rival, this can be labeled the Whitecaps best MLS result in years. Next up for Portland is a massive road match against third-placed Colorado on Saturday while Vancouver stays on the road to face San Jose.