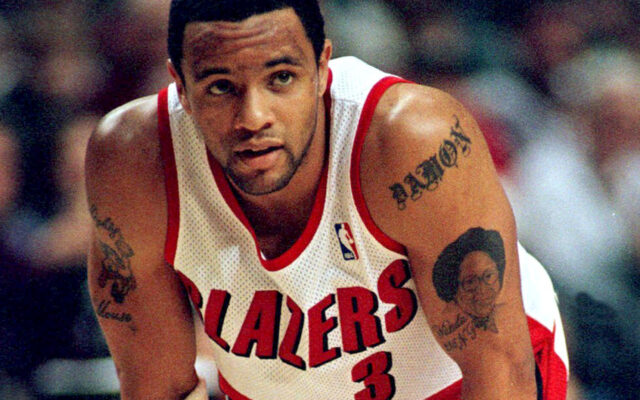 FILE--Portland Trail Blazers guard Damon Stoudamire takes a breather against the Lakers in Portland, Ore., April 21, 1999. Stoudamire will have his hands full against Phoenix's Jason Kidd as the two teams start the first round of NBA playoffs in Portland Saturday. (AP Photo/Jack Smith,File)

Being a Portland Trail Blazers fan is an interesting experience. After eight years of playoff basketball capped by a 2018-19 run to the Western Conference finals, we’re left wondering what’s next. And from an outside perspective, what’s next looks grim. Damian Lillard might get traded, CJ McCollum is on Royal Street, and Chauncey Billups is still unproven. And yet there could be hope, and it resides in the No. 7 pick. This article will analyze the best No. 7 picks from the past decades in hopes the Blazers can create their own magic.

But we had to give Portland some love, and Stoudamire was solid in his own right.

He burst onto the scene with the Toronto Raptors in 1995, winning the Rookie of the Year award that same season. His first three years were spent in Toronto before being traded to the Blazers during the 1997-98 season.

Upon arrival in PDX, expectations were high as he joined a squad with players such as Bonzi Wells, Arvydas Sabonis, and Rasheed Wallace.

The results were infamously mixed.

Portland found success in Stoudamire’s first year, winning the Pacific Division in a shortened 50-game season due to a lockout.

They even made a run in the postseason before losing to the San Antonio Spurs in the Western Conference Finals.

The Blazers repeated the same feat the following year but faltered shortly after and eventually descended into the troubled “Jail Blazers” era.

Stoudamire probably never reached his full potential in PDX, but he usually proved an entertaining watch.

If this doesn’t give Portland fans hope, then nothing will.

Stephen Curry revolutionized the game, paving the way for other long-ball shooting guards like Damian Lillard, Trae Young, and whoever’s next.

Curry may be the face of the league, yet he is often unappreciated, even undervalued.

Even though the institution may say otherwise, he’s undeniably the NBA’s best point guard.

Ja Morant, Chris Paul, and Young are phenomenal talents, but their resume is light rails away from Curry’s.

The trio has a combined zero championships while he’s currently competing for ring number four.

Not bad for a seventh pick.

When we think West, we think a lot of point guards. But we often don’t think Jamal Murray.

Before Murray’s injury, he was one of the fastest rising stars in the NBA. The combination of Nikola Jokic and him appeared to be a third player away from one of the best teams in the league.

And Michael Porter Jr. may already be there, so this story is largely unwritten.

With Murray back for the 2022-23 season, this team should be a lock for a top-four seed in the West.

Prior to his injury, he averaged 21.2 PPG, 4.8 AST, and four rebounds. He did all this while shooting 48 percent from the field, which is a testament to his high IQ.

We all know who Curry and Murray are; they’re some of the best players in the league. But they’re also former No. 7 draft picks.

Sometimes it’s easy to forget that. Stumptown, we have hope.