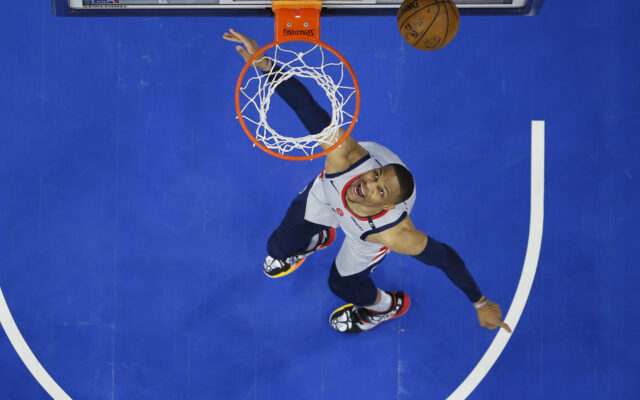 We’ve arrived at another NBA offseason, and the league that provides more player movement than any other is off to a hot start. On Thursday, the Los Angeles Lakers traded for Russell Westbrook, the biggest domino to fall in the early parts of the offseason. But will the deal for Westbrook be considered a big domino or a full-on dud?

If you take a moment to think about it, this shouldn’t really be much of a question. Western Conference contenders from Dallas all the way up to the Portland Trail Blazers should be welcoming this deal with open arms.

Now before the outrage starts over disrespecting what Westbook can do on the floor, pause for a moment. The debate over Russell Westbrook’s individual ability on the court should absolutely not be debated. Westbrook, the nine-time NBA All-Star, has shown that he can still get it done at the age of 32.

In fact, last season, as a member of the Washington Wizards, Westbrook led the league averaging nearly 12 assists per night to go along with 22.2 points per game. Westbrook also helped lead the Wizards to a solid second half of the season, allowing Washington to qualify for the NBA Playoffs before being bounced by Philadelphia in the first round.

So why should teams like the Blazers be happy the Lakers acquired this superstar? Well, first off, the fit. Think back to the Lakers’ big issue last season, shooting the basketball, especially from distance. Westbrook will not help with that, like at all. He shot just 29.5 percent on catch-and-shoot 3s, and beyond just the numbers, he is basically dared by opponents to shoot with defenders often backing way off of him and packing the paint, daring the 13-year vet to hoist it from deep.

The Lakers are also already in jeopardy of losing much of the little shooting talent they had. Six of the Lakers’ top seven shooters in terms of made 3’s are either unrestricted free agents or are already gone.

The next reason is his unique skill set. While he might still be the most explosive player in the Association, he is also one of the most ball-reliant players. Pairing that type of style with LeBron James is an experiment that bodes to be a high-risk and high reward situation.

Of course, this isn’t entirely new to Westbrook as he spent a season with James Harden, another ball-dominant star like LeBron in Houston. But in that example, Westbrook had one of his worst all-around statistical seasons since 2015-16.

While he can often still score and impact the game, even when he’s not shooting the basketball from deep, his role as a third option on the Lakers will be tested indeed. While the trade certainly was flashy, it lacks the kind of flair that should seriously improve LA.

And while the Lakers continue to hike up their salary cap on older stars, teams like Portland have a chance to seriously improve this off-season and perhaps finally bring Damian Lillard and the city of Portland a ring.