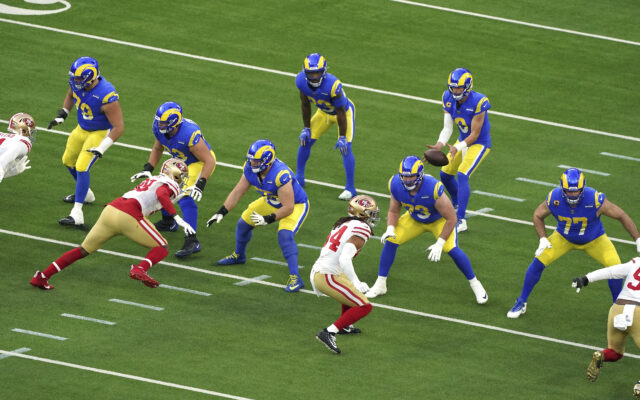 The Los Angeles Rams won Super Bowl LVI, which means the NFC West has a solid case to be viewed as the best division in the NFL. But is it? … Well, yes, but not for that reason alone.

It’s never simply “the best division in the NFL is that from which the Super Bowl champ resides,” but there is more than enough evidence to support the NFC West as the toughest division when delving deeper.

At first glance, LA’s 12-5 regular season record and No. 4 seeding don’t seem all that imposing as far as Super Bowl champions go. More often than not, an eventual champ finishes as the top seed in its respective conference. From 1975 (when a seeding system was introduced to the NFL playoffs) to 2021, a No. 1-seeded team went on to win the championship 25 times out of 46 Super Bowls, which equates to 54.4 percent of the time. There’s a significant drop-off from there as No. 2 seeds hoisted the Lombardi trophy 10 times (21.7 percent). Fourth seeds actually come in third at five wins (10.9 percent), followed by a three-way tie between Nos. 3, 5, and 6 at two apiece (4.3 percent).

The 2021-22 campaign featured an extra regular season game and the NFL postseason expanded to seven teams from both the AFC and NFC but reduced teams receiving a first-round bye to just one in each conference rather than two. Even with the above breakdown and the new season and playoff format, it’s not at all unprecedented for a No. 4 seed like this year’s Rams to win a title – it happens roughly one out of every five Super Bowls – but let’s dig even deeper.

Three of the four teams in the NFC West made the postseason this year. We know LA secured the NFC’s No. 4 seed while Arizona (11-6) and San Francisco (10-7) were Nos. 5 and 6, respectively. Seattle (7-10) finished outside of the playoffs for the first time since 2011. When looking at how the teams fared in divisional play during the regular season, we see the Cardinals actually posted the best record at 4-2. LA and Seattle both went 3-3, and the 49ers were a mere 2-4. Ironically, San Francisco’s only two divisional wins came against the eventual Super Bowl champs but was swept by both Arizona and Seattle. The Cards split their games against the Rams and Seahawks. The only NFC West opponent LA didn’t lose to was Seattle.

What does all that mean? It means the NFC West teams beat up on each other more than the rest of the NFL did, which played a major role in seeding. Outside of the division, here’s how the NFC West fared in the regular season: LA Rams (9-2), San Francisco (8-3), Arizona (7-4), Seattle (4-7).

But the ultimate evidence for why the NFC West is the NFL’s best division can be found from how this year’s postseason played out. No team from the NFC West fell to a team from any other division (or conference, of course) once the playoffs began. Let’s break it down: The Cardinals lost in the Wild Card round to the Rams. The 49ers downed No. 3-seeded Dallas (NFC East) during Wild Card weekend and upset the top-seeded Packers (NFC North) in the Divisional round before falling to LA in the NFC Championship. The Rams obviously won the title, but in addition to bouncing Arizona and San Francisco from contention, beat No. 2-seeded Tampa Bay (NFC South) in the Divisional round and Cincinnati (the AFC’s No. 4 seed) in the Super Bowl.

When no other division can defeat you in the postseason, I think you’ve earned the title of the best division in football.