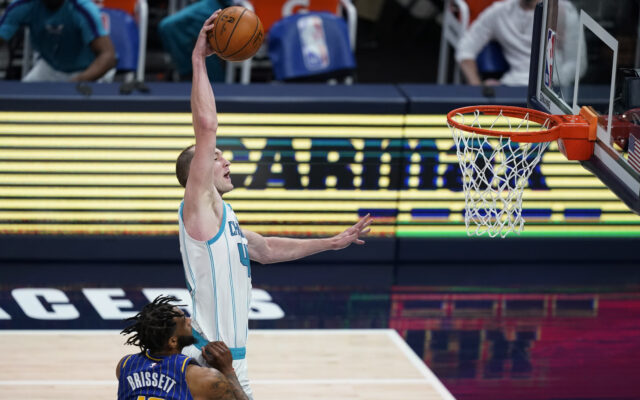 NBA free agency 2021 is in full swing as nearly 100 deals have been made since negotiations officially opened at 6 p.m. ET (3 p.m. PT) on Monday. Although teams cannot officially sign players until 12:01 p.m. ET (9:01 a.m. PT) on Friday, many deals have already been agreed upon.

Portland has accounted for four of these deals, which doesn’t seem like much at first glance. But, considering there are 30 teams and nearly 100 signings, that would be an average of roughly 3.3 signings per team. So let’s break things down even further. Not all teams have the same draw as the Heat (nine players signed so far) and Lakers (eight), and most have faired better than Memphis and Minnesota, who have yet to sign anyone. Therefore, the Trailblazers’ four signings should be considered as a pretty solid number overall. However, it’s not about how many players a team inks a deal with; it’s about the quality of those players.

Let’s dive into the Blazers’ signings so far.

Portland retained the 27-year old Powell on a 5-year, $90 million deal. After trading away promising and exciting 22-year old prospect Gary Trent Jr. for Powell in a deadline deal with Toronto last season, the Blazers went 15-12 over the final 27 games and finished sixth in the Western Conference. Powell’s scoring output dipped from 19.6 with the Raptors to 17.0 with Portland, but he still finished with a career-high 18.6 for the season. He also averaged 3.1 rebounds, 1.9 assists, and 1.2 steals. However, his versatility on the defensive end proved invaluable as he often matched up with the opposing team’s best guard or forward.

Overall, Powell is a great fit with Portland, as he proved last year. However, he doesn’t answer the problem they’ve had for several years – their size. At 6-3, Powell is vastly undersized when he plays at small forward. The Powell deal is fairly team-friendly and tradable, should it come to that someday. For now, I give this a solid A.

Next up, Cody Zeller.

Portland signed the 6-foot-11, 240-pound center to a one-year deal. This move isn’t nearly as eye-popping as the Norman Powell deal, no matter how you spin it. Perhaps the most exciting part of this deal outside of it simply being a new player coming in is that the Blazers signed Zeller to the league minimum – around $2.4 million. You can’t get much more team-friendly than the minimum.

Zeller will undoubtedly replace Enes Kanter, who signed with Boston. The former Charlotte Hornet played his fewest minutes per game (20.9) in three seasons last year and subsequently had his lowest scoring average (9.4 ppg) in three years as well. However, he was efficient on the glass as he grabbed 6.8 RPG last year, something any team would be happy to get from a backup center.

While anything but an overwhelming signing, this addition does address the size need mentioned above. And despite Zeller seemingly being a downgrade from Kanter, Portland added much-needed depth at the center position with a big man who has an arguably underrated offensive game (55.9 FG% and 1.8 APG) at next to nothing financially. That’s an overall win in my book. I give this signing a C-plus.

A 29-year old shooting guard listed at 6-6 who can play small forward. He averaged a modest 5.3 points, 2.4 rebounds, and 1.3 assists in 21.1 minutes per game for Atlanta in 2020-21. However, he saw very little floor time – 7.3 mpg – during the Hawks’ Eastern Conference Finals run come playoff time, mainly due to injuries.

Snell shot just over two 3-pointers a game during the regular season last year but knocked them down at a 56.9 percent clip. His average over the previous four seasons was closer to 40 percent, which still warrants attention.

What doesn’t show up in the stat line, however, is his defensive prowess. He has been dubbed a “3 and D” wing player, which gives Portland another player to match up with tougher wings in the league, such as Kawhi Leonard and LeBron James.

This could be a sneaky good pickup for Portland. Snell has never been asked to carry a large burden on the offensive end. With the Likes of Lillard, McCollum, and Powell, it’s unlikely that would change now. The Blazers get a B-plus.

Six years ago, this would have been an exciting signing that would have potentially made a big enough wave to make Dame take notice. Now, it’s simply one of, “oh, that guy who used to be ok is still playing?”

Portland is clearly hoping to find a spark in McLemore that resulted in some good streaky shooting in years past, but it’s also resulted in a lot of off nights for the 6-foot-3 shooting guard.

The former seventh overall pick of the 2013 draft who averaged 12.1 ppg in his second season with Sacramento as a 22-year old is now coming off a 2020-21 campaign that started in Houston, finished with the Lakers, and saw him average 8.0 ppg as a 27-year old. He’s anything but ancient in terms of age, but his promise has dwindled, and his inconsistency shouldn’t be taken lightly.

Taking a low-risk flier on McLemore isn’t the worst idea Portland could have, but it doesn’t exactly seem like much of a title-chasing, “Damian Lillard-pleasing” move either. I’ll give it a C-minus.