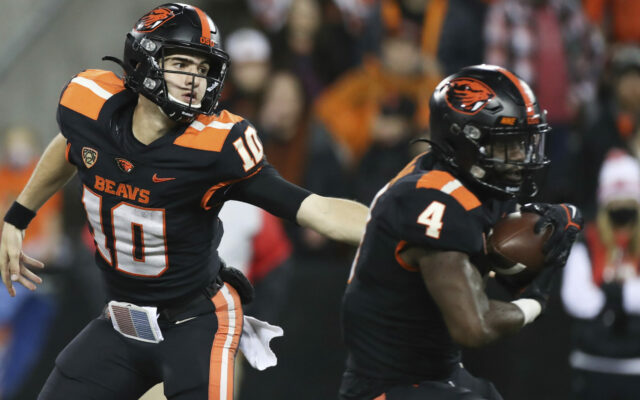 Vrrrhhhhhhhhhhhhhhh spark up that Beaver third-down chainsaw noise, Oregon State football has arrived. How we got here is irrelevant. However, it is safe to say that OSU is a legit title contender in the North division. This is a far cry from where most analysts had the Beavs projected before the season. The nice ones had OSU slotted in the No. 4 spot in the division, but most had them lower. Regardless of how the rest of this year plays out, Jonathan Smith has already put his program on the map with monumental victories against Washington, Utah, and USC. But maybe, just maybe, this is the beginning of something legendary. Remember, no one thought the men’s basketball team would make the Elite Eight either. Here are three keys to Oregon State’s hot start in conference play.

No one knew precisely how the Beavers would replace Jermar Jefferson before the season began. Jefferson was everything for OSU in the shortened 2020 year.

He rushed for 858 yards and seven touchdowns in seven games before bolting for the 2021 NFL Draft.

In that Oregon game, he rushed for 226 yards and two touchdowns and almost single-handedly propelled the Beavs to an upset victory over the Ducks.

Without him, they were supposed to be trash, enter B.J. Baylor.

Ever since Baylor won the starting job, he’s continued exactly where Jefferson left off.

Through seven games this year, Baylor’s rushed for 829 yards, ten touchdowns and is averaging a blistering seven yards per carry.

Before this season, he had never rushed for more than 177 yards in a year.

And while obviously, the offensive line deserves a considerable portion of the credit, there’s no fun in that, so we’ll stick with the quickness. But it is important to note that Oregon State arguably has one of the most cohesive units in the nation and probably the best overall group in the Pac-12.

It’s a perfect complement to his hard-nosed rushing style. And combined, they help fuel a Beavers offense that is surprisingly first in the league in total yards, rushing yards, and points alike.

His heart is what makes him fun to watch, but his production on the field is what could have Oregon State dancing in a bowl of roses.

It may prove easy to forget that just five years ago, OSU was the laughing stock of the Pac-12.

Before coach Smith’s arrival on campus, the Beavers had just ended their 2017 campaign with a 1-11 record, with that one victory coming against FCS foe Portland State.

He didn’t inherit a rebuild; he inherited nothing.

But the former Beavs quarterback had a belief, and he began to put his vision into action

2018 proved rough, but Oregon State found one moment of greatness with a 28-point come from behind victory against the Buffs in Boulder.

The following season the Beavers found their rhythm winning five games, their most since the 2014 campaign. They were also one questionable fourth-down call away from making a bowl game.

For 2020, we’ll wipe the slate clean with the exception of Oregon State’s shocking upset against the rival Ducks. It was the one notable result in the Covid year.

Regardless of record, his teams found a way to compete and ultimately created a buzz around the program.

The hometown boy came back and struck gold, and now it’s time to cash out.

There are many phenomenal linebackers sprinkled throughout the Pac-12. Some standouts include Oregon’s Noah Sewell, Colorado’s Nate Landman, and Utah’s Devin Lloyd.

However, Oregon State’s Avery Roberts may be the most important to his team.

In Athlon’s “Pac-12 Football 2021 All-Conference Teams,” Roberts was selected to the First-Team Defense. He was the only Beav defender to receive this honor.

Now that we’re all caught up on the Corvallis boys, excluding safety Jaydon Grant who’s a stud in his own right.

Let’s turn our focus to Roberts. For him, the name of the game is efficiency.

He’s finished every single contest this season with at least ten tackles, minus the Idaho outing, but that doesn’t count.

He epitomizes what this Beavers team is all about. A whole lotta heart, a whole lotta grit, and belief in themselves which is all that really matters.