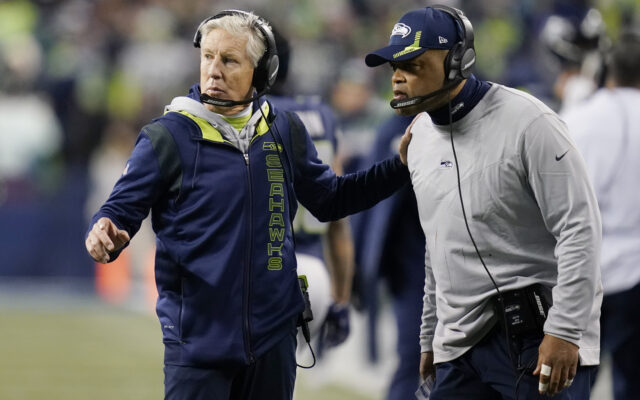 Following a disappointing 2021 season, Pete Carroll lives to see another day as head coach of the Seahawks. The same can’t be said about Ken Norton Jr., as Seattle officially let go of the now-former defensive coordinator on Thursday. The Seahawks now need to fill that role. Let’s take a look at three names who could be early candidates.

Seattle has already requested an interview with Denver’s DC of the last three seasons – all under recently fired Broncos head coach Vic Fangio. Donatell spent five seasons (2015-19) as Defensive Backs Coach in Chicago under Fangio, then the Bears’ DC. Despite sporting a poor record (19-30) over the last three seasons, Denver’s defense performed well in 2019 and 2021. During his first year as DC in the Mile High City, Donatell’s unit finished 10th in points allowed and 12th in yards allowed. Those numbers fell significantly in 2020, dropping to 25th and 21st, respectfully. Donatell’s defense rebounded in a big way this past season, allowing the third-fewest points and eighth-fewest yards – rankings signifying an elite defense – yet Denver went 7-10 and missed the playoffs.

Donatell is still under contract with the Broncos, but with Denver in the midst of a head coaching search, there’s a chance the new HC will want new coordinators. However, with how good Denver’s defense performed, I’d be surprised if the Broncos part ways with him.

Bradley is a well-known name in Seattle as he served as DC on Pete Carroll’s initial Seahawks staff when he took over in 2010. Bradley was a holdover from Jim Mora Jr.’s single season at the helm in 2009 when the team went 5-11. Though he left for the head coaching role in Jacksonville following the 2012 season – an 11-5 regular season campaign and 1-1 in the playoffs – there’s little doubt Bradley immensely helped the ascension of the vaunted “Legion of Boom” defense that led to the Seahawks’ first Super Bowl win following the 2013 season (and another Super Bowl appearance the next year as well).

As mentioned above, Bradley departed Seattle after 2012 to be the head coach in Jacksonville. It was a turbulent tenure, to say the least, as he won just 14 games in nearly four seasons with the Jaguars, finishing 14-48 overall, with his best season coming in 2015 at 5-11. He was fired after 14 games in 2016, going 2-12. Bradley resumed his DC duties with the Chargers from 2017 to 2020 before taking his current role with Las Vegas. Bradley’s first NFL coaching job was in 2006 as Tampa Bay’s Defensive Quality Control Coach. He was promoted to Linebackers coach in 2007 and held the role until taking the DC job with Seattle in 2009.

Like the Donatell-Denver situation, Bradley is still under contract with the Raiders. Unlike the Donatell situation, no official request has been made (as of yet) for an interview. Seattle could be waiting to see if Vegas decides to fire Bradley, whose Raiders fell 26-19 to Cincinnati in the Wildcard round of the playoffs last week. In one season as Vegas’ DC, Bradley improved the Raiders defense overall, moving from 30th in points allowed in 2020 to 26th in 2021. The biggest difference, however, was in yardage allowed as Vegas went from 25th in 2020 to 14th this past season.

With a new coaching regime about to take control, the Raiders could realistically fire Bradley – at least, I believe it’s more likely than Donatell being let go by Denver.

Hurtt appears to be the leading, if not only, candidate for the newly vacant DC role who is already on the current Seahawks staff. Having been with the team since 2017, Hurtt could be a logical and intelligent choice for the promotion as he knows the team, staff, and culture of Seattle. Hurtt added the title of Assistant Head Coach in 2018, showing great respect from the organization as a whole.

Hurtt began his NFL coaching career in Chicago, where he was hired as Assistant Defensive Line Coach in 2014. Oddly enough, Hurtt and Donatell (DBs) were both with Chicago from 2015 to 2016. Hurtt was promoted to Outside Linebackers Coach in 2015 and held it until leaving for Seattle in 2017.

Not surprisingly, Hurtt lacks the experience of the two previously mentioned coaches. Donatell has 31 years of experience, and Bradley has 16. Hurtt has eight. However, both Donatell and Bradley eventually earned promotions, and those decisions paid off – not only for the coaches but for the teams as well.

As the DL coach, it’s not as simple as looking at overall defensive success as it could be for a DC. However, when comparing rushing and passing yards allowed in 2021, Seattle surrendered the second-most passing yards. That means only one team (Baltimore) gave up more yards through the air than the Seahawks. Comparatively, the Seattle run defense ranked 15th in yards allowed. Sure, No. 15 might not be eye-popping, but it’s vastly better than 31st. Plus, as a 7-10 team, the Seahawks trailed late in many games, meaning teams were more apt to run than pass. Therefore, Hurtt’s unit did a great job against the run overall.

Another aspect one can look at in terms of the defensive line – to an extent – is sacks. Seattle ranked just 22nd (tied with Baltimore and the Giants) in sacks last season. It’s a flawed D-line stat for the mere sake that linebackers and defensive backs all contribute depending on coverage and blitz schemes. Regardless, ranking in the bottom 10 in sacks isn’t exactly a good thing.

Still, Hurtt is a strong, viable candidate to fill Seattle’s DC void. And due to the fact he’s currently on the staff and doesn’t have to be released by another team, I’d say he currently has the best odds to land the position.

I’m sure other candidates will emerge, but these three could all find themselves in the Pacific Northwest, depending on how the coaching carousel plays out.

Sure, there were fewer games over last weekend than any week during the regular season, but predicting all six Wildcard outcomes correctly is still something I’m proud of. Let’s see if I can have similar success in the Divisional round.

The Bengals are arguably the most exciting team to watch in the NFL. The Titans are welcoming back Derrick Henry, who finished ninth in the league in rushing despite playing in only nine games. Henry’s 117.1 rushing yards per game were tops in the NFL, but it remains to be seen how his workload is handled.

I think Cincy is the more talented team overall, but it’s also more inconsistent and inexperienced. Plus, Tennessee is the No. 1 seed for a reason – it finds ways to win games. Look for Henry to find his footing in the second half.

The 49ers showed their defense is no joke by downing the league’s top-scoring offense 23-17 in Dallas. They also proved Deebo Samuel is one of the most dynamic players the NFL has to offer. Green Bay had a week to rest up and prepare – I’d be surprised if the Packers expected San Francisco to be the team to prep for, though.

Still, Green Bay has Aaron Rodgers, while the Niners have Jimmy Garoppolo. No disrespect, but who would honestly take the latter?

Everything seemed to click for the Rams in their 34-11 Wildcard win over Arizona. Matthew Stafford finally won a playoff game, and the team looks among the strongest in the league. But Tampa Bay has Tom Brady. However, the Bucs have been dealing with many injuries – and a mid-game departure (Antonio Brown) – recently.

Yes, Tampa won easily against Philadelphia, but… it was Philadelphia. I’m going with LA to beat a banged-up Bucs team in a somewhat surprising pick.

This is probably the most intriguing matchup of this weekend. Both teams had hiccups early in the season but finished strong entering the playoffs. Buffalo looked like a team ready to run away with the Super Bowl last Saturday, dismantling New England 47-17. The Chiefs started a bit slow but ultimately dominated Pittsburgh 42-21 on Sunday. Now we get a rematch of last year’s AFC Championship game – which Kansas City won 38-24.

This could be the best game of the season. I want to pick the Bills as an upset… and that’s exactly what I’m going to do. The Bills’ defense looks absolutely elite and in sync. Despite last week’s blowout win against a vastly overmatched Steelers team with an aging Ben Roethlisberger, Kansas City just doesn’t seem as dominant as it has the last couple of seasons – even at home.