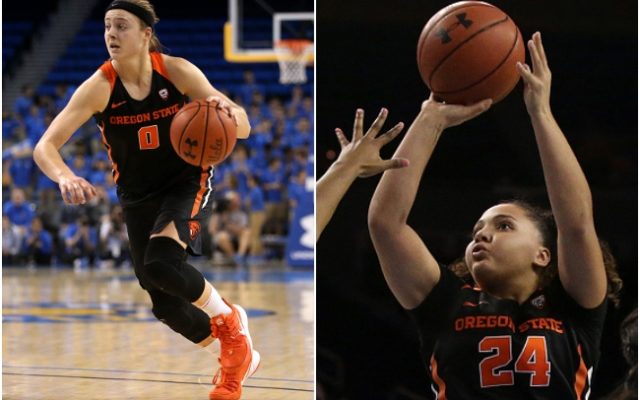 CORVALLIS – For the second-straight year, Oregon State’s Mikayla Pivec and Destiny Slocum have both been named as All-America Finalists by the Women’s Basketball Coaches Association.

The duo made up two of the eight players selected from Region 5. The WBCA Selection Committee will select the 10-player All-America Team from the 52 regionals finalists, to be announced April 2.

Pivec has also been selected as an All-America Honorable Mention by both the AP and the USBWA. The senior has been named to the All-Pac-12 team, the Wooden Award Ballot, the Cheryl Miller Award Top-10, and the Naismith Trophy Midseason Team, and is a semifinalist for the Naismith Defensive Player of the Year Award. The guard was tabbed as the Preseason WNIT MVP and to the All-Tournament Teams for both the Maui Classic and the Miami Thanksgiving Classic.

The guard from Lynnwood, Wash. averaged 14.8 points and 9.3 rebounds per game during her senior season. She set Oregon State’s career rebounding record earlier this month. Pivec finished second in the Pac-12 in rebounding and fifth in the conference in field goal percentage. The guard had 14 double-doubles this season, and is in the top-10 in Oregon State history for career points, rebounds and assists.

For her contributions as a complete student-athlete, Pivec was named a finalist for the Senior CLASS Award. The senior has displayed a passion for community service, especially finding efficient ways to get the homeless access to resources. She is a team captain, and completed her undergraduate degree in three years, majoring in BioHealth Sciences. Pivec is currently a graduate student working toward a degree in Biochemistry and Biophysics.

Overall, Slocum has 507 assists in her collegiate career, good for 22nd among active player in the nation, and the second- highest total by any non-senior. She has posted four career point-assist double-doubles, and has gone over 20 points 16 times in her two seasons with the Beavers.

A point guard from Meridian, Idaho, Slocum finished ninth in the Pac-12 in scoring and fifth in assists per game. For her efforts off the court, Slocum was an Academic All-District selection. Pivec and Slocum co-founded the Beavs CARE community service organization, which brings athletes from different sports together to engage in community service.