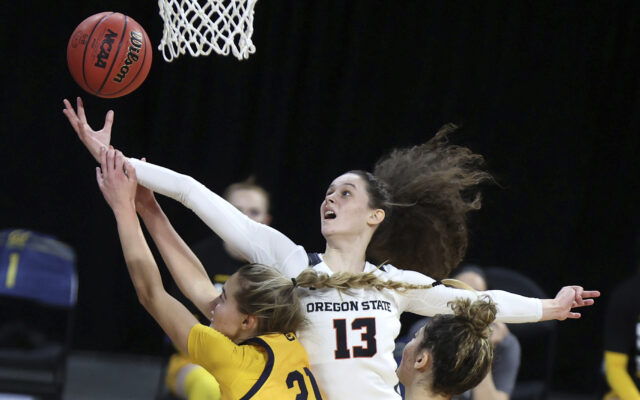 OSU took care of business in the first round of the Pac-12 Women’s Basketball Tournament with a win over Cal, 71-63.

Talia von Oelhoffen led the way with 20 points off the bench.

Taylor Jones was incredible with a 17-point, 13-rebound double-double. Oh, she also had two blocks, a steal and no turnovers.

Aleah Goodman provided another solid performance for the Beavs with 12 points, five assists and two rebounds.

Sasha Goforth, pictured above, was the final OSU player in double figures with 11 points. She also stuffed the rest of the stat sheet with five rebounds, three assists, two steals and a block.

Oregon State led 39-27 at the break. Cal put up a valiant effort and actually outscored the Beavs in the second half 36-32.

The third OSU-UO battle is set for Thursday morning (11 a.m. PT) on the Pac-12 Networks.