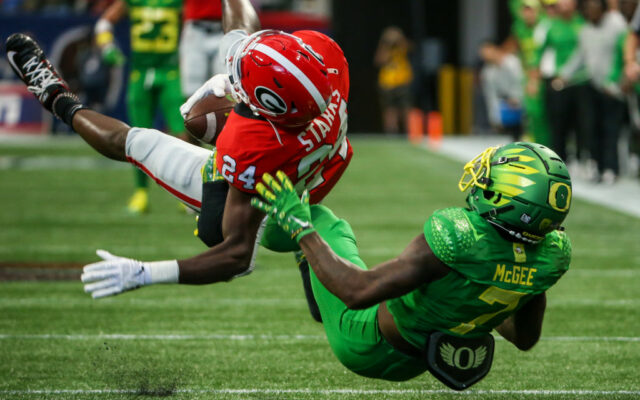 Atlanta, GA - SEPTEMBER 03: Georgia Bulldogs defensive back Malaki Starks (24) intercepts a pass intended for Oregon Ducks wide receiver Seven McGee (7) during the Chick-Fil-A Kickoff Game between between the Oregon Ducks and the Georgia Bulldogs on September 3, 2022, at the Mercedes-Benz Stadium in Atlanta, GA. (Photo by Jevone Moore/Icon Sportswire via Getty Images)

Following their season-opening blowout loss to reigning national champion Georgia, the Oregon Ducks find themselves on the outside of the AP Top-25 poll going into week two.

Oregon State got five votes for the poll, more than North Carolina (3), South Carolina (2), Purdue, UCLA, and Arizona (1 each).  Oregon State has not been ranked in the poll since 2013.

The Ducks (0-1) open their home schedule on Saturday, hosting Eastern Washington, the 11th-ranked team in FCS.  Kickoff is set for 5:30 p.m. on Pac-12 Network.

Oregon State (1-0) visits Fresno State (1-0), a third consecutive opponent from the Mountain West dating back to last year’s bowl game with Utah State and including their opening win over Boise State.  The Beavs are slight 1-point road favorites after opening as a 1.5-point underdog.  Kickoff is set for 7:30 p.m. on Saturday night on CBS Sports Network.