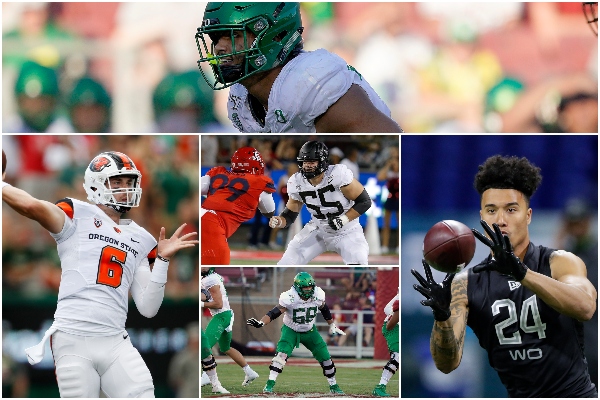 There we no Ducks or Beavers selected on day two of the 2020 NFL Draft, but on the final day of the draft that would change. Including the first Beaver to be drafted since 2017.

The first big name off the board for the Ducks was their star linebacker, Troy Dye.

Dye was selected in the 4th round by the Minnesota Vikings, 132nd overall. ESPN’s Louis Riddick had an interesting comment regarding Dye’s “commitment to the game”, in which many took to Twitter to defend the 4x team leader in tackles.

Sorry gotta go get my hearing checked because it sounded like somebody on this telecast just questioned Troy Dye’s commitment to the game, and no sane person would do that. Must be a problem with my ears.

Louis Riddick just questioned if Troy Dye is committed to football. HE PLAYED NEARLY THE WHOLE SEASON WITH A FRICKIN’ CLUB ON HIS HAND!!! pic.twitter.com/qTu3ktkIVb

Oregon OL, Shane Lemieux, went next as the 150th overall selection in the 5th round.

Thankful for the opportunity to work! Couldn’t be happier to be apart of such a great organization. Go Big Blue @Giants pic.twitter.com/oDOOas9C0n

Early in the 6th round, we saw our first Beaver off the board in a few years… QB Jake Luton found a new home in Jacksonville, joining fellow Pac-12 QB Gardner Minshew.

One of protectors of Luton on the Beaver’s offensive line was selected next. Blake Brandel was taken 203rd overall by the Minnesota Vikings.

Luton’s main target on the Beaver’s also got picked up in the 6th round. WR Isaiah Hodgins was selected 207th overall to the Buffalo Bills.

Other Pac-12 players drafted on Day 3: