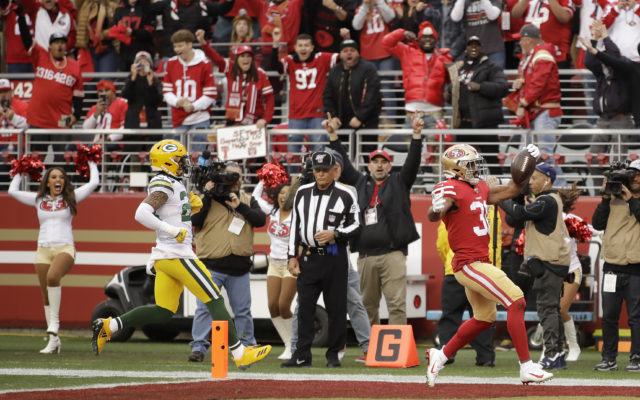 Six NFL teams didn’t know what to do with Raheem Mostert. The San Francisco 49ers signed Mostert on March 19, 2019 to a three-year, $8.7 million deal. On Sunday against the Green Bay Packers, he was worth every penny.

Mostert had 160 yards rushing and three touchdowns in the first half. He finished with a franchise record 220 rushing yards, and the NFC Championship record of four touchdowns. Both numbers are also second-most in any NFL Playoff game.

Conversely, Jimmy Garoppolo threw a total of six passes in the first half. His final pass in the opening 30 minutes was with 2:10 to go. He didn’t throw his seventh pass until 8:10 left in the fourth quarter. Garoppolo finished 6/8 with 77 passing yards.

The teams swapped punts in their opening drives before the Mostert show took over. The Niners started at their own 11, and the drive was capped with a 36-yard run from the former Purdue Boilermaker.

The game stayed close as the Niners could only muster a 54-yard FG on their next drive, 10-0 San Francisco.

Then, after a bad Packers punt, the 49ers took over at the Green Bay 37. After backfield-mate Tevin Coleman went out with an arm injury, Mostert ran in a 9-yard score. The rout was on, 17-0 Niners.

Aaron Rodgers and the Packers didn’t get into San Francisco territory until the middle of the second quarter. They ran their first play on the other side of the 50 with under 8 minutes to play in the first half.

Green Bay couldn’t capitalize on their longest drive, at that time, as Rodgers fumbled the snap and the Niners recovered. Eight plays later Robbie Gould kicked another field to put the 49ers up 20-0 at the 2:00 warning.

The Packers decided to make a run at scoring before half, and that decision would backfire.

Rodgers threw an interception in his own territory, and the Niners cashed it in. Mostert with an 18-yard run put the 49ers up 27-0 at the break.

Green Bay finally got on the board in their first possession of the second half. Rodgers found Aaron Jones for a nine-yard TD catch and run, 27-7 SF still up.

Whatever hope the Packers had being down just 20 was quickly erased.

San Francisco ran the ball on all 7 plays of their first third quarter drive. Who else but Mostert capped it off with a 22-yard touchdown run. 34-7 49ers.

As you’d expect, Rodgers and the Packers didn’t give up. He found Jimmy Graham for a 42-yard catch, and Aaron Jones punched in the 1-yard TD to bring the Packers within three possessions, 34-13. Green Bay went for two and missed it.

The Niners recovered the ensuing onside kick, but they went three-and-out. Rodgers found Davante Adams for 65 yards, and the Packers later scored on the drive. Rodgers found Jace Sternberger for a 13-yd TD. 34-20 SF.

With the clock, and the scoreboard against them, the Packers aired it out after the fourth quarter 2:00 warning. Richard Sherman picked it off. Garoppolo kneeled the game away, and the 49ers head back to the Super Bowl.