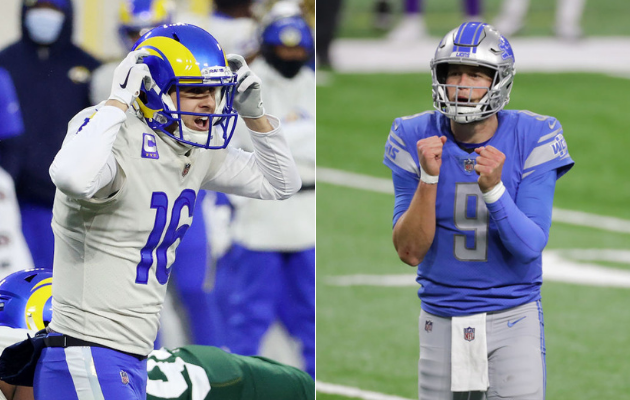 The rumors swirled for a few days, but the LA Rams actually pulled the trigger to swap Jared Goff for Matthew Stafford. LA also sent draft picks — a 2021 third-, a 2022 first- and a 2023 first-round pick — in the next three NFL Drafts to the Lions.

The trade marks the first exchange of former No. 1 overall picks in the common draft era.

Los Angeles hasn’t made a first-round selection since they picked Goff in 2016. LA will continue without their own first-round pick through 2023.

After Dan Campbell was introduced as the Lions next head coach reports surfaced the team and Stafford agreed to part ways this offseason. The two sides worked together, and now LA and Detroit have new QBs.

A riff appeared to grow between Rams head coach Sean McVay and Goff ever since their Super Bowl loss to New England a few years ago. Now, McVay is rid of Goff and gets a different former No. 1 overall pick.

Stafford has yet to win a playoff game, but he’s also been subjected to dragging Detroit to the postseason only three times. Now a “genius” head coach and a “stat-stuffing” QB have a chance to change their legacies.

Meanwhile, pour one out for Goff who goes from sunny Los Angeles to Detroit. Sorry Detroit, but you know I’m right. Also, Goff goes from a young, offensive-minded head coach to a loon who talked about biting kneecaps at his introductory press conference.