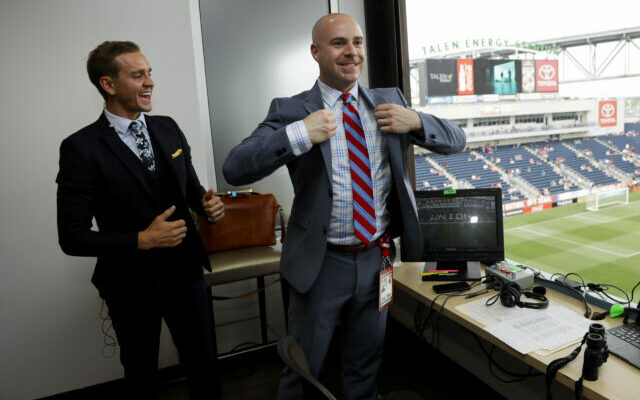 FILE - In this May 28, 2018, file photo, Fox Sports broadcasters Stuart Holden, left, and John Strong put on their coats for a photo before an international friendly soccer match between the United States and Bolivia in Chester, Pa. Whether this World Cup will resonate with American viewers is one of the big questions facing Strong, Holden and the entire Fox production. The United States' failure to qualify for Russia was a huge blow for Fox after it reportedly paid more than $400 million to acquire the rights to broadcast the tournament in America. (AP Photo/Matt Slocum, File)

The Bald Faced Truth with John Canzano radio show has undergone many iterations since its inception in 2007, with a plethora of producers, board operators, and on-air talent complimenting the bald one himself.

John Strong of FOX Sports is perhaps the most notorious past show member and participated in some of the show’s more entertaining moments in its early days.

Now, John is fresh off calling a World Cup as lead play-by-play broadcaster for FOX Soccer.  John visited the BFT studios on Thursday to reminisce on what it meant to call this year’s World Cup, the magnitude of calling the World Cup Final, the tragic passing of Grant Wahl, and much more.

Strong also talked about some of the top show moments from the early days of the BFT with John Canzano when John was the number-two voice on the show as board-operator and update anchor.

Listen to John’s full appearance below.  He joined at the top of hour two (46:30) and stayed for over an hour and a half.