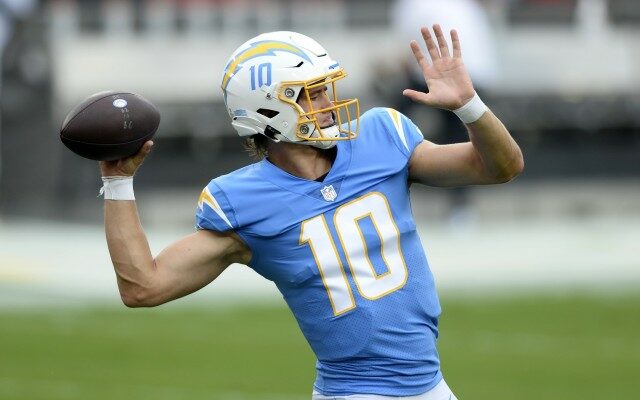 What a season it was for Justin Herbert.

Herbert played and started in fifteen games for the Chargers, entering in Week 2 after a bizarre medical-related injury to Tyrod Taylor forced Herbert into action against the Kansas City Chiefs.  Herbert went on to throw 31 touchdown passes, a new NFL record for a rookie QB.  He averaged 289.1 passing yards a game, fourth-most in the league this season and another rookie record.  The Chargers went 7-9, winning their last four games of the season behind Herbert’s impressive play.

Herbert played quarterback at Oregon from the 2016 through 2019 seasons, culminating his senior year with a 12-2 mark, a Pac-12 Championship and a Rose Bowl victory over Wisconsin.   He was selected sixth overall in the 2020 NFL Draft by the Chargers, the third quarterback taken behind LSU’s Joe Burrow (Cincinnati Bengals) and Alabama’s Tua Tagovailoa (Miami Dolphins).