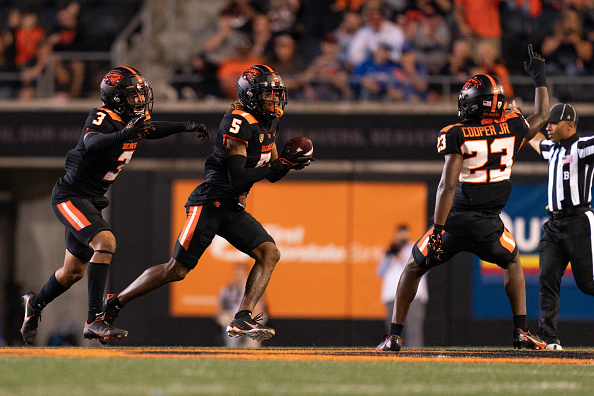 CORVALLIS, OR - SEPTEMBER 03: Oregon State Beavers defensive back Alex Austin (5) celebrates an interception with teammates Jaydon Grant (3) and Ryan Cooper Jr. (23) during the fourth quarter at Reser Stadium on September 3, 2022 in Corvallis, Oregon. Oregon State went on to win 34-17 against the Boise State Broncos. (Photo by Ali Gradischer/Getty Images)

Oregon State opened the 2022 season with a statement victory over Boise State, 34-17 at Reser Stadium, to get to 1-0 for the first time in Jonathan Smith’s tenure as head coach.

Tuesday, a trio of Beavers were honored with weekly awards.  Defensive back Jaydon Grant was named the Pac-12 Defensive Player of the Week after recording an interception, a forced fumble, two passes broken up and four tackles.  His interception was the seventh of his career and helped set up the Beavs’ first touchdown, while his forced fumble occurred at the OSU two-yard line to keep Boise State out of the end zone and preserve what became a first-half shutout by the Beaver defense.  It is the first conference defensive player of the week honor in Grant’s career.

Additionally, right guard Brandon Kipper was named the Pac-12 offensive lineman of the week for the first time in his career.  He helped pave the way for 178 team rushing yards on Saturday night, with the offense totaling 470 yards by night’s end.  Kipper joins Nathan Eldridge and Nous Keobounnam as the third Beaver to win offensive lineman of the week.  It was Kipper’s 33rd consecutive start, and Pro Football Focus gave him a grade over 80 for his individual performance.

Finally, Jack ‘The Hammer’ Colletto was named to the Paul Hornung Award Honor Roll for week one, after he picked up right where he left off in 2021, rushing for a 41-yard touchdown while also recovering a fumble and making three tackles.  The Hornung Award is given to the most versatile player in college football.  Colletto was twice recognized by the award last season.

Oregon State (1-0) visits another Mountain West foe, Fresno State (1-0), on Saturday night in California.  Fresno State opened as a 1.5-pt betting favorite, but the line has since swung through back to the Beavs as a 1-pt road favorite.  The total is set at 61.