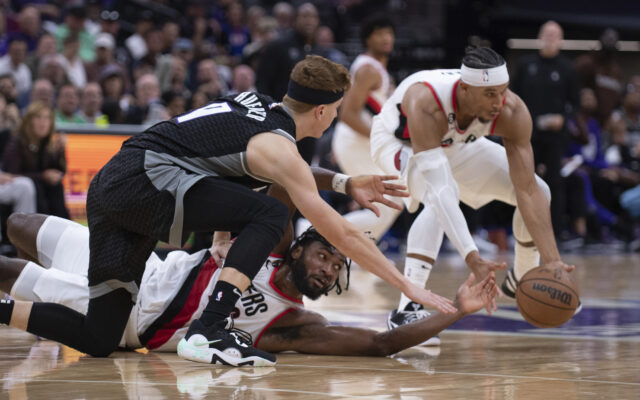 Forget the final score of Wednesday night’s 115-108 win over the Sacramento Kings.

In fact, forget the fact that the Trail Blazers even won at all.  Normally, a win or a loss is the ultimate (or sometimes only) thing that fans care about. But last night, no matter the result, the Portland Trail Blazers were a joy to watch:

Whether they win or lose, the Blazers have been fun to watch tonight

We were finally able to see the first glimpses of the style of play that Chauncey Billups wants his team to play, and it was a drastic departure from previous seasons. Portland was jumping into passing lanes, stripping guards driving to the lane, and relying on the activity and length of their wings. Missing were the days of relentless pick and roll leading to a 3-point attempt. In fact, the Trail Blazers only attempted 28 shots from beyond the arc, a full 16 fewer than the Sacramento Kings. The pick and roll was still heavily in play, but Portland instead used it to attack the middle, racking up 56 points in the paint and 33 free throw attempts. These aren’t Terry Stotts numbers.

There were weaknesses on display as well; Jusuf Nurkic looked lost and there was no size on the bench waiting to take his place. Portland still allowed a barrage of perimeter looks. Lillard struggled to find his shot.

In previous seasons, any one of those things would have been enough to send the Blazers packing with a difficult-to-watch loss. Wednesday was a different story. When Nurkic proved ineffective, the Trail Blazers went small with Justise Winslow at center and caught fire. As the Kings started connecting from distance, the Trail Blazers doubled down on taking away the drive and challenging shots at the rim. Even though Lillard wasn’t able to get going, he actively deferred while Anfernee Simons, Jerami Grant, and Josh Hart took over the 4th quarter.

This isn’t to say that there won’t be growing pains this season. The team is still not fully constructed to compete in a stacked Western Conference. But, looking at the tape of game one, I can’t help but wonder what they would look like with a healthy Gary Payton II guarding De’Aaron Fox. I wonder how much better the defense can play together. And I’ve circled December 15, the day that players that signed new contracts are eligible to be traded, as the first day that Joe Cronin can start to hunt for upgrades.

The Trail Blazers got a win over the Kings. No big deal. But the way they played was something that has been sorely missing over the years. It was active. It was connected. It was fun.